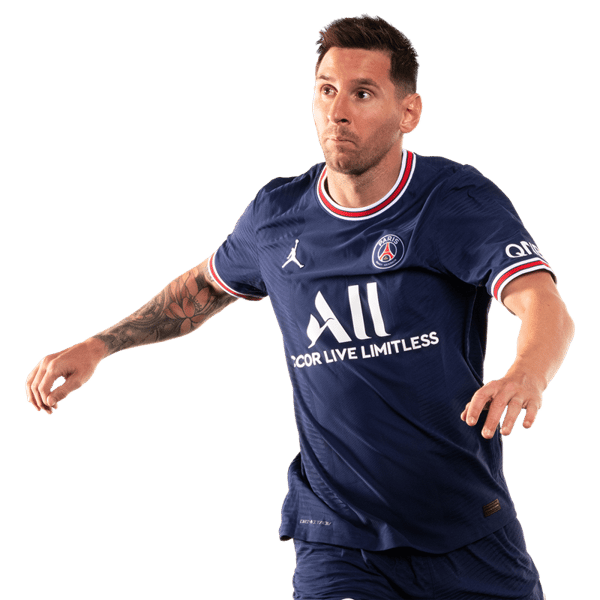 Lionel Messi is a professional footballer who currently play at Paris Saint-Germain as a forward after playing most of his club career at FC Barcelona and Argentina National Football Team as an attacker.

Leo Messi's footballing career started in 1995 at Newell's Old Boys, where he played until the year 2000. At the age of 13, Lionel Messi crossed the Atlantic to try his luck in Barcelona and joined the Under 14s. Messi made spectacular progress at each of the different age levels, climbing through the ranks to Barça C, followed by Barça B and the first team in record time.

In the 2003-2004 season, when he was still only 16, Messi made his first-team debut in a friendly with Porto that marked the opening of the new Do Dragao stadium.

The following championship-winning season, Messi made his first appearance in an official match on October 16, 2004, in Barcelona's derby win against Espanyol at the Olympic Stadium (0-1). With several first-team players seriously injured, the services of several reserve team players were called upon, and Messi became a regular feature of Barça squads.

His breakthrough came in the 2005-06 season, starting with an amazing performance in the Joan Gamper Trophy match against Juventus. He was also outstanding at the Santiago Bernabéu, in Barcelona's unforgettable 3-0 win, and also at Stamford Bridge, in the Champions League match against Chelsea. The injury kept him sidelined for much of the later stage of the season, but Messi still played a total of 17 league games, 6 in the Champions League and 2 in the Copa del Rey, and scored eight goals.

In the 2008/09 season, and now without Ronaldinho alongside him, Messi became the main star of the Barça squad that claimed the treble and he scored in the Copa del Rey and Champions League finals. He also scored the goal against Estudiantes that won Barça their first Club World Cup.

Messi, as in Rome, played a vital role in the Champions League final at Wembley in 2011 were scored a scorcher from outside the area to put his team ahead.

The season 2011/12 saw Messi again key as Barça claimed the Spanish Super Cup, the UEFA Super Cup, the FIFA Club World Cup, and the Copa del Rey. The following season the striker was once more vital as the blaugranes claimed the league title with 100 points.

In 2014/15 his 56 goals in all competitions laid the foundation for a second treble in the Club’s history. In 2018 Messi become captain, taking over from the departed Andrés Iniesta. The league title in 2019 saw the Argentine become the most decorated footballer in FC Barcelona history with 34 trophies to his name.

On an individual level, Messi has continually broken records throughout his career. In 2005 he became the youngest player ever to score in the league for Barça, a record now held by Ansu Fati. In 2011/12 Messi moved past César Rodríguez's record of 232 official goals to become the Club's all-time top goalscorer. He ended 2012 with the record number of goals in a calendar year (91), thus beating the historic tally established by Gerd Müller (85 for Bayern Munich and Germany in 1972).

The following year, 2013/14 Messi reached yet another landmark, overtaking Paulino Alcántara’s total of 369 goals to become the leading goalscorer of all time at the Club

Messi Steps Up For Argentina To Defeat Mexico 2-Nil