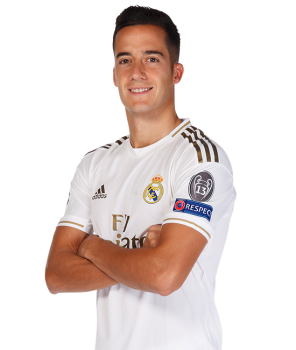 Lucas Vázquez Iglesias (Born 1 July 1991) is a Spanish professional footballer who plays for Real Madrid and the Spain national team as a right-winger.

Starting his career at Real Madrid, he made his first-team debut in 2015 after a season on loan at Espanyol. He made his La Liga debut with the latter and won several major honors with the former including three Champions Leagues and the 2016–17 La Liga title.

On 30 June 2015, Real Madrid exercised their buyback clause and Vázquez returned to the club. He made his debut on 12 September in a 6–0 away win over his former team Espanyol, and his first start came a week later, in a 1–0 home defeat of Granada CF.

Vázquez scored his first competitive goal on 30 December 2015, replacing Karim Benzema for the final 15 minutes of the league fixture against Real Sociedad and netting in a 3–1 success at the Santiago Bernabéu Stadium. He contributed with seven appearances in the season's UEFA Champions League, as the tournament ended in a win; in the final against Atlético Madrid, he again came on for the Frenchman late into the second half of a 1–1 draw and converted his attempt in the penalty shootout triumph.

Vázquez started the 2016 UEFA Super Cup against fellow Spaniards Sevilla FC, providing an assist to Sergio Ramos in injury time to take the game to extra time, where Real Madrid eventually won 3–2. He signed a new contract on 26 October 2016, running until 2021.

Vázquez appeared 33 times during 2016–17 and scored twice, helping Real Madrid to its first league in five years. He added ten matches in the campaign's Champions League, scoring once in the group stage as his team also conquered the latter tournament.

Vázquez made ten appearances during the 2017–18 Champions League and added one goal when Madrid won their third consecutive and 13th overall title in the competition.

In November 2019 he broke his toe after dropping a weight on it.

Vázquez did not represent Spain at any youth level. On 17 May 2016 he, Saúl Ñíguez and Sergio Rico were the three uncapped players named in Vicente del Bosque's provisional squad for UEFA Euro 2016 in France, and he also made it to the final list of 23. He made his debut on 7 June, starting and playing 61 minutes in a 0–1 friendly loss to Georgia at the Coliseum Alfonso Pérez.

Vázquez appeared once in the tournament, replacing Álvaro Morata in the 70th minute of a 0–2 round-of-16 defeat against Italy at the Stade de France. He was then included in the final squad for the 2018 FIFA World Cup. making his debut in the competition on 15 June when he replaced David Silva for the final four minutes of the 3–3 group stage draw to Portugal.