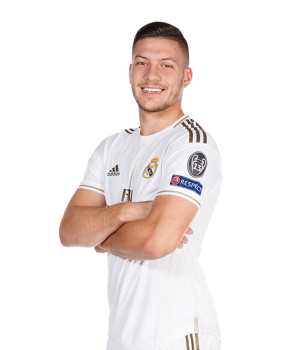 Luka Jović (born 23 December 1997) is a Serbian professional footballer who plays as a striker for Spanish club Real Madrid and the Serbia national team.

In June 2017, Jović joined Eintracht Frankfurt on a two-season loan while his new club secured an option to sign him permanently. He made five appearances as they won the 2017–18 DFB-Pokal, and scored the only goal of the win at Schalke 04 in the semi-finals on 18 April 2018, but was an unused substitute in the 3–1 final win over Bayern Munich.

20-year-old Jović became the youngest player to score five goals in a Bundesliga game when he did so in a 7–1 home win over Fortuna Düsseldorf on 19 October 2018. On 14 March 2019, he scored the only goal, his seventh for the campaign, in a 1–0 win over Inter Milan to secure the club's progression to the quarter-finals of the Europa League. In doing so, he helped Eintracht become the first German club ever to record eight wins in a single season in the competition.

On 17 April 2019, Eintracht Frankfurt exercised a clause in Jović's contract to make his loan move permanent until 30 June 2023

In May 2018, Jović was named in Serbia's preliminary squad for the FIFA World Cup in Russia. On 4 June, he made his international debut in a friendly match against Chile, coming on as a substitute for Aleksandar Mitrović in the 84th minute. Later in June, Jović was included in the final 23-man squad for the 2018 FIFA World Cup, where he appeared as a late substitute against Brazil.

On 20 March 2019, Jović scored his debut goal for the national team in a friendly against Germany.