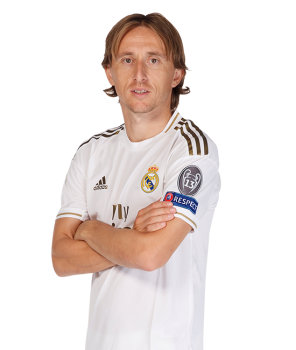 Luka Modrić is a Croatian professional footballer who plays as a midfielder for Spanish club Real Madrid and captains the Croatia national team. He plays mainly as a central midfielder, but can also play as an attacking midfielder or as a defensive midfielder, usually deployed as a deep-lying playmaker. He is widely regarded as one of the best midfielders of his generation, and the greatest Croatian footballer of all-time.

Born in Zadar, Modrić's childhood coincided with the Croatian War of Independence which displaced his family. In 2002, he was signed by Dinamo Zagreb at age 16, after showing promise with his hometown club NK Zadar's youth team. He continued his development in Zagreb, before spells on loan to Zrinjski Mostar and Inter Zaprešić. He made his debut for Dinamo in 2005 and won three consecutive league titles and domestic cups, being named the Prva HNL Player of the Year in 2007. In 2008, he moved to Premier League club Tottenham Hotspur for a club-record transfer fee of £16.5 million, where he led Spurs to their first UEFA Champions League appearance in almost 50 years, reaching the quarter-finals of the 2010–11 tournament.

In the summer of 2012, Modrić joined Real Madrid for a £30 million transfer fee. There he became a key contributor and helped the team win La Décima and was selected for the 2013–14 Champions League squad of the season. After Zinedine Zidane took over Madrid, Modrić was critical to three consecutive Champions League titles from 2015–16 to 2017–18, each time being voted into the squad of the season. He won the La Liga Award for "Best Midfielder" in 2016 for the second time and the UEFA Club Football Award for "Best Midfielder" in 2017 and 2018. In 2015, he became the first Croatian player to be included in the FIFA FIFPro World XI, in which he was regularly included until 2019, as well in the UEFA Team of the Year between 2016 and 2018. In 2018, Modrić became the first Croatian player to win the UEFA Men's Player of the Year Award, and by winning The Best FIFA Men's Player and Ballon d'Or awards, he became the first player other than Lionel Messi or Cristiano Ronaldo to claim the awards in more than a decade. In 2019, was awarded the Golden Foot award for career results and personality.

Modrić made his international debut for Croatia against Argentina in March 2006 and scored his first international goal in a friendly match against Italy. He has since anchored Croatia's "second Golden Generation", participating in every major tournament Croatia has qualified for, including the UEFA Euro 2008, 2012, and 2016, as well as 2006, 2014, and 2018 FIFA World Cup. At UEFA Euro 2008, he was selected for the Team of the Tournament, becoming only the second Croatian to ever achieve this honor. Following group stage eliminations in his first two World Cups, Modrić led Croatia to the 2018 World Cup Final, and he received the Golden Ball award for Best Player of the Tournament. Furthermore, he has been named the Croatian Footballer of the Year a record eight times between 2007–2019.

A diminutive midfielder, Modrić is described as a quick and creative playmaker, with great vision, who is able to change the course of the game with incredibly deft passes and solo, long-range efforts. He plays with both feet in combination with his swift offensive positioning, off the ball. He passes the ball accurately across long and short distances (passing range of perfection), even with the outside of his boot. His ball control, first touch, positional play, ability to retain possession, and set the tempo of the game makes him a mesmerizing player to watch. A former attacking midfielder, he is also noted for his dribbling skills and is considered a master of the "pre-assist". He is referred to as the Midfield Maestro ("Midfield Master") for his mastery of footballing fundamentals, tactical strategy, and precision in execution. His tactical vision and strategic planning have had him compared to a conductor of an orchestra, a "Puppet Master", and a "Midfield Magician". After moving to Real Madrid he was nicknamed by the Spanish media as El Pájaro ("the bird"). In the dressing room, he is affectionately called "Lukita".