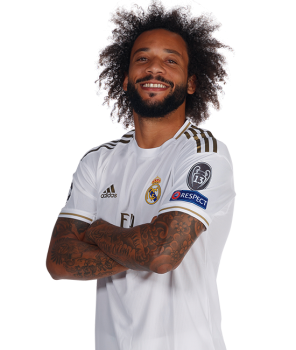 Marcelo Vieira da Silva Júnior (born 12 May 1988), known as Marcelo, is a Brazilian professional footballer for the Spanish club Real Madrid and the Brazil national team. He plays mainly as a left-back, but can also operate as a left-winger.

Marcelo debuted for Brazil in 2006 against Wales, scoring a goal. He was called up for the 2008 Olympic squad, where he won a bronze medal. Four years later, he was part of Brazil's 2012 Olympic team, as one of the three over-age players, where Brazil won a silver medal. Marcelo was selected as a member of Brazil to play in the 2013 Confederations Cup and started all five matches, as Brazil won 3–0 against Spain in the final. He was part of Brazil's squad in the 2014 FIFA World Cup which was his first World Cup. Brazil reached the semi-finals and he was named to the tournament's Dream Team. In May 2018, he was named in the final squad for the 2018 FIFA World Cup where he once again was named to the tournament's Dream Team.

Marcelo joined Real Madrid during the January transfer window in 2007. On his arrival, club President Ramón Calderón said, "He is an important signing for us. He is a young player who will inject some freshness into the side and is part of our plan to bring younger players into the squad. We're very happy because he's a pearl that half of Europe wanted." Many spectators hailed him as Roberto Carlos's potential successor in the left-back role.

Marcelo made his debut as a substitute in the 2–0 defeat against Deportivo La Coruña on 7 January 2007. On 14 April 2007, then coach Fabio Capello gave Marcelo his first start for Real Madrid against Racing de Santander. Real Madrid controversially lost the game 2–1. In the 2007–08 season, Marcelo started nearly all of Madrid's league games under the new manager Bernd Schuster. His ability, speed running across the field, attack, and defense had enabled him to become a very important player for Real Madrid.

After a string of poor performances in 2009, Marcelo found himself on the bench for much of the remaining season while under new manager Juande Ramos, mainly as deputy to the more defensive-minded Gabriel Heinze. Ramos deployed Marcelo as a winger on more than one occasion, and the Brazilian adapted well to his new role. He scored his first goal after receiving a heel flick from striker Gonzalo Higuaín and slotting the ball past the goalkeeper in Madrid's 4–0 thumping of Sporting de Gijón. After the game, coach Ramos declared that Marcelo's future would be positioned as a winger, but will push back to defense when required. Marcelo scored his second goal for Real Madrid in a victory over Almería, a powerful strike from outside the box with his weaker right foot.

On 18 April 2009, he scored the third goal of his Real Madrid career, when he scored the only goal of the game against Recreativo de Huelva away from home. He scored his fourth goal against Sevilla at the Estadio Ramón Sánchez Pizjuán in April 2009.