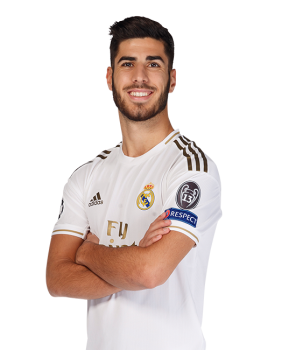 Marco Asensio Willemsen (born 21 January 1996) is a Spanish professional footballer who plays as a winger and attacking midfielder for Real Madrid and the Spain national team.

After starting out at Mallorca, he signed with Real Madrid in November 2014, being consecutively loaned to his former club as well as Espanyol. Upon his return, he went on to win several honors, including two Champions League trophies.

Asensio made his senior debut for Spain in 2016. He represented the nation at the 2018 World Cup.

Born in Palma, Majorca, Balearic Islands to a Dutch mother and a Spanish father, Asensio joined RCD Mallorca in 2006 from CF Platges de Calvià. His mother, Maria Willemsen, died of cancer when he was 15.

Asensio struggled with growth deficiencies in his knees during his youth, which only subsided when he was a teenager.