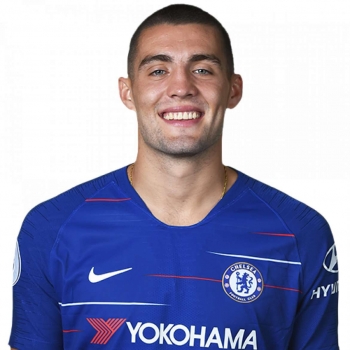 Mateo Kovačić is a Croatian international footballer who plays as a central midfielder for English club Chelsea and the Croatia national team.

Mateo Kovacic completed a permanent move to Chelsea in July 2019 following a successful season on loan at Stamford Bridge.

The Croatian international has plenty of experience having featured regularly in Serie A (with Inter Milan), La Liga (Real Madrid), the Champions League, and at the international level.

Kovačić began his professional career with Dinamo Zagreb at the age of 16, with whom he won two consecutive league titles, before joining Inter in 2013.

Kovacic is a ball-playing central midfielder who thrives on quick combinations. He combines hard work with skill in the possession and penetrative passing. He can also play anywhere across the midfield and was named Chelsea Player of the Year for 2019/20.

Kovacic made his Blues debut when he came off the bench in an early-season win over Arsenal, the Croatian impressing with his clever use of the ball and technical qualities, before making his first start in our next match away at Newcastle. He quickly became an important member of the three-man midfield favoured by Maurizio Sarri, playing on the left of the trio.

In the 2019-20 season, Kovacic enjoyed the best form of his Chelsea career to that point during the first half of his second season at the club. A regular under Frank Lampard, his combination play with Jorginho proved particularly effective, as did the driving runs from midfield that showcased his dribbling ability.