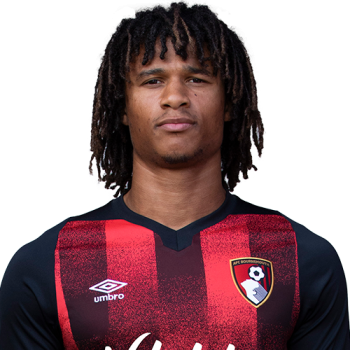 Nathan Ake is a Dutch professional footballer who plays for Premier League club Manchester City and the Netherlands national team.

Nathan Ake was Manchester City’s second signing of summer 2020, arriving on a five-year deal which keeps him at the Club until 2025.

The 25-year-old defender joined from Bournemouth, where he made 109 appearances in three seasons.

Ake played predominantly at centre-half for the Cherries but is capable of playing left-back and started his career as a holding midfielder.

A 13-cap Netherlands international, he moved to England in 2011 at the age of 16, when Chelsea signed him from Feyenoord.

He made his first-team debut on Boxing Day 2012 and went on to be part of the 2013 Europa League and 2014 League Cup-winning squads.

However, first-team opportunities were limited and he embarked on several loan spells, first at Reading, before a season with Watford in 2015/16, when he won the Hornets’ Young Player of the Year award.

He joined Bournemouth on a six-month loan deal in 2016/17 and moved permanently for a club-record fee the following summer.

Aguero, Laporte Miss Out In Manchester City Opener Against Wolves

Manchester City Possible New Centre Back, Nathan Ake Things To Know About Him