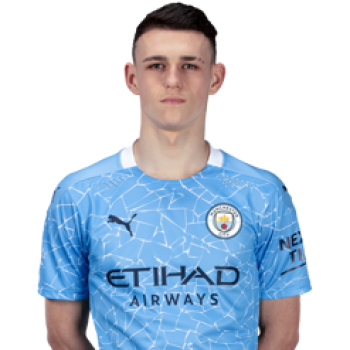 Philip Walter Foden is an English professional footballer who plays as a midfielder for Premier League club Manchester City and the England under-21 team.

Widely regarded as one of England’s most promising young players, lifelong Blue Phil Foden excelled at youth level before graduating into the first-team

The Stockport-born playmaker joined City at U9 level now, aged 19, has two Premier Leagues, two Carabao Cups and a Community Shield in his medal collection.

A creative, left-footed midfielder, Foden allies his eye for a pass with an ability to glide past opponents, something which stood out during his time in the Academy.

He was an FA Youth Cup final runner-up in 2016/17, scoring in the first leg of the final as City lost to Chelsea and he also found the net 11 times in the U18 Premier League that season.

His form prompted Pep Guardiola to include him in his squad for the Champions League tie against Celtic in December 2016.

The following summer Foden made the England U17 squad for the European Championships and scored in the final, where the Young Lions lost to Spain on penalties, but he returned to City for pre-season and was included in the first-team tour of the United States.

He produced several impressive displays and made several matchday squads in the early part of the 2017/18 season before departing for the U17 World Cup in India.

England won the tournament and Foden was instrumental, scoring twice in the final and scooping the Golden Ball prize for the tournament’s best player.

Returning to Manchester, he was handed his senior debut against Feyenoord in the Champions League in November 2017. Replacing Yaya Toure in the 75th minute, he became the youngest City player to play in European competition.

A month later he became the youngest Englishman to start in a Champions League game when he was named in the starting XI against Shakhtar Donetsk and his Premier League debut followed 10 days later.

He made several cameos as City lifted the 2017/18 Premier League title and signed a new deal in December 2018, which keeps him at the Club until 2024.

Last season, he saw more game time, scoring seven goals in 26 appearances as City swept all before them in English football.

Man City's Foden In For 2 PFA Awards After Stellar Season