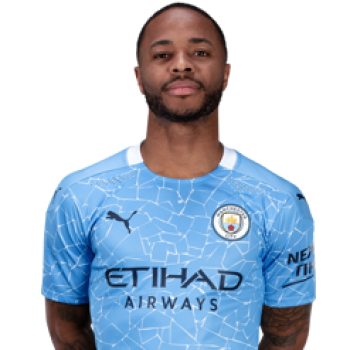 Raheem Shaquille Sterling is a professional footballer who plays as a winger and attacking midfielder for Premier League club Manchester City and the England national team.

Regarded as one of the country’s most promising youngsters, he has fulfilled on his early potential to become one of the Premier League’s most potent attacking players.

He is nine games shy of his 200th appearance for the Club and his 69 goals and 65 assists have helped City win two Premier Leagues, three Carabao Cups, an FA Cup and the Community Shield.

His England debut against Ukraine in September that year saw him become Liverpool’s youngest international cap and he was a key member of the side that pushed City to the wire in the 2013/14 title race.

His performances earned him the 2014 Golden Boy trophy, awarded by sports journalists to Europe’s best U21 player.

Sterling played one more season on Merseyside before he opted for a fresh start at the Etihad Stadium in the summer of 2015.

He enjoyed a blistering first half of the 2015/16 campaign, scoring nine goals in his first 23 starts for the Blues, including a hat-trick against Bournemouth and two goals in two minutes against Borussia Monchengladbach on his 21st birthday.

His third season saw him score his best-ever haul of goals - 23  - and play a vital role in City's title and Carabao Cup success, also winning him a nomination for PFA Young Player of the Year and he represented England at the 2018 World Cup.

Raheem scored the winning penalty in the Carabao Cup shootout win over Chelsea in 2019 and capped an incredible campaign with another Premier League title, the FA Cup, and was voted the PFA Young Player of the Year and the Football Writers' Player of the Year, too.

Sterling Open To Move Away From Man City