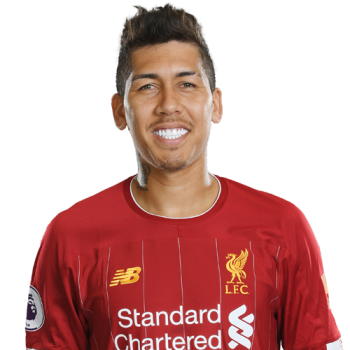 Roberto Firmino Barbosa de Oliveira is a Brazilian professional footballer who plays for Premier League club Liverpool and the Brazil national team as a forward, attacking midfielder or winger.

Described by Jürgen Klopp as the ‘engine’ of his team, Roberto Firmino is a Champions League-winning striker who does so much more than just score goals.

Blessed with prodigious physical gifts that complement his exceptional footballing talents, the Brazil international leads Liverpool’s line with a fearsome and influential combination of industry and ingenuity.

Alongside Sadio Mane and Mohamed Salah, Firmino forms part of one of Europe’s premier attacking trios and scored 43 goals over the course of the 2017-18 and 2018-19 seasons to help the Reds reach back-to-back Champions League finals.

The first of those showpieces, against Real Madrid, ended in heartbreak but, 12 months on, Firmino recovered from a muscle injury in time to start versus Tottenham Hotspur.

Goals by Salah and Divock Origi in Madrid ensured Liverpool exorcised the memories of Kyiv and lifted their sixth European Cup.

The No.9, who committed his long-term future to the Reds in April 2018, has become a firm fan favorite at Anfield since joining from Hoffenheim in the summer of 2015 and a new chant in his honor sound-tracked the club’s journey to glory at Estadio Metropolitano.