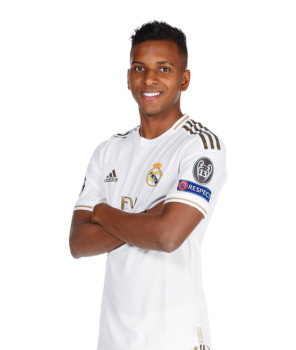 Rodrygo Silva de Goes born 9 January 2001 simply known as Rodrygo, is a Brazilian professional footballer who plays as a winger for Spanish club Real Madrid and the Brazil national team.

He began his career with Santos, where he played 80 games and scored 17 goals before a €45 million transfer to Real Madrid in 2019. On the international level, Rodrygo made his senior debut for Brazil in 2019, aged only 18.

Rodrygo made his first-team – and Série A – debut on 4 November 2017, coming on as a late substitute for Bruno Henrique in a 3–1 home win against Atlético Mineiro. The following 25 January he scored his first senior goal, netting a last-minute winner in a 2–1 Campeonato Paulista away win against Ponte Preta.

On 15 June 2018, Real Madrid reached an agreement with Santos for the transfer of Rodrygo, with the player joining Los Blancos in June 2019 and signing until 2025. The rumored fee was of €45 million, with Santos receiving €40 million as the club owned 80% of his rights with the rest owned by Rodrygo's agents.

On 25 September 2019, Rodrygo made his first-team debut and scored his first league goal against Osasuna within a mere minute. He scored his first hat-trick, being a perfect hat-trick, and gave an assist for the club on 6 November, aged 18 years and 301 days old, against Galatasaray in a 6–0 win in the 2019–20 UEFA Champions League season. The second youngest ever to score a hat-trick in the competition, he is also the first player born in the 21st century to score in the tournament.