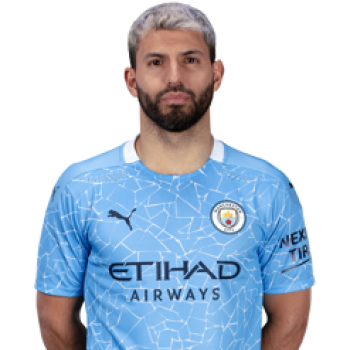 Sergio Leonel Agüero del Castillo is an Argentine professional footballer who plays as a striker for Premier League club Manchester City and the Argentine national team.

Sergio Aguero has etched his name into Manchester City history as the all-time record goalscorer.

The much-loved striker also has the honor of being the player with the most league goals for the Club, while one of the most iconic moments in the City’s long history also belongs to him.

It was the Argentine who crashed home the 94th-minute goal on the final day of the 2012 season to beat QPR and seal the Club’s first Premier League title at the expense of Manchester United.

Aguero has been a revelation since breaking City’s transfer record in July 2011. His debut was a sign of things to come, hitting a brace against Swansea and scoring 30 times in his dramatic title-winning first season. He bagged 28 goals in the 2013/14 campaign as the Blues won a second Premier League title as well as the Capital One Cup.

In 2014/15, he had his best goal-scoring season, with 32 strikes taking his overall tally past 100 in all competitions.

In 2015/16 he scored 29 from 42 games – achieving the 100 Premier League goals milestone in the process and he began the 2016/17 season in blistering form with 11 goals in his first six games and ended with 33 goals in all competitions.

He broke Eric Brook's 78-year Club record when he scored City's third in a 4-2 win at Napoli to move on to 178 goals for the Blues and thus create a new record.

His 30 goals during 2017/18 won him a place in the PFA Team of the Year before an injury ended his season with his tally on 199 goals for the Blues.

Aguero reached 32 goals again last season, becoming only the second man, after Thierry Henry, to score 20 or more goals in five consecutive Premier League campaigns. The 31-year-old has been monumentally important to the Club’s success and he has 11 trophies to show for his eight seasons of sterling service.

Kun penned an extension to his current deal in September 2018 and will remain with the Blues until 2021.

Prior to his City career, he played for Independiente, where he became the youngest debutant in the Argentine Premier League, aged 15 years and 13 days.

His exploits in his homeland earned him a move to Atletico Madrid, where he cemented his status as one of Europe’s deadliest marksmen, winning the Europa League in his five-season spell.

He has represented Argentina at three World Cups and was selected for the 2019 Copa America, where he will hope to reach 40 international goals.