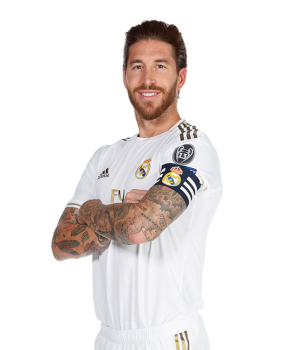 Sergio Ramos García is a Spanish professional footballer who plays for and captains both Real Madrid and the Spanish national team as a center-back. He has also played as a right-back earlier in his career. Ramos is widely regarded as one of the best defenders of his generation and has also received praise for his passing and goalscoring capabilities.

After emerging through Sevilla's youth academy and spending two seasons with the senior side, Ramos moved to Real Madrid in the summer of 2005. Since then, he has gone on to become a mainstay for Real Madrid and has won 21 major honors, including four La Liga titles and four UEFA Champions League titles, becoming one of La Liga's top goalscorers from a defensive position. He played a crucial part in the build-up to all four UEFA Champions League wins, being named in the competition Squad of the Season each time. He also notably scored the equalizer in the 93rd minute of the 2014 UEFA Champions League Final.

Internationally, Ramos represented the Spanish national team at four World Cups and three European Championships. He won the 2010 FIFA World Cup and the UEFA European Championship in 2008 and 2012, being named to the FIFA World Cup Dream Team in 2010, and the UEFA Euro Team of the Tournament in 2012. He made his first appearance for Spain at the age of 18 and, in 2013, he became the nation's youngest player to ever reach 100 caps. Ramos currently holds the record as the most capped player in the history of the Spanish national team and is his country's tenth-highest all-time goalscorer.

Regarded as one of the best defenders in the world, Ramos is a physically strong player who excels in the air due to his elevation, eye for goal, and heading accuracy, making him a goal threat on set-pieces; he is also a competent and aggressive tackler. In addition to his defensive skills and goalscoring ability, he is gifted with pace, good technical ability, as well as good distribution, passing, and crossing ability. According to Spanish sports newspaper Marca, FIFA's official records confirmed that in 2015, Ramos was clocked at a sprinting speed of 30.6 kilometers per hour, making him one of the fastest footballers in the world at the time. He is also an accurate penalty taker and is known for often using the Panenka technique when taking them.

Ramos has earned plaudits for his leadership, athleticism, technical prowess, and his ability to excel both offensively and defensively, as well as his versatility, which allows him to be deployed as a center-back and as a full-back; in his youth, he often played as a right-back, while he later established himself as a center-back as his career progressed. Due to his wide range of skills, his former Real Madrid manager Carlo Ancelotti has compared him to legendary defender Paolo Maldini; he went on to describe him as "the best defender in the world at the moment" in 2014, a view which was echoed by Giorgio Chiellini in 2020. Ramos has also occasionally been deployed as a central or defensive midfielder, in particular under Ancelotti during the 2014–15 season. Ramos has been praised for his decisive performances in important games, most notably for Real Madrid, due to his tendency to score crucial goals for his team, and is considered by several pundits to be one of the most reliable performers in high-pressure situations. However, his tactical sense, consistency, and concentration from match to match have been questioned at times by pundits and other footballing figures, who have accused him of being too impulsive in his challenges or prone to occasional defensive errors throughout the course a season.

Ramos is also often criticized in the media for using excessive, reckless force while playing, as well as for his lack of discipline and tendency to pick-up an excessive number of unnecessary cards

Lastly, Ramos also holds the record for being the most carded player in the history of the Spanish national team, with 24 yellow cards.