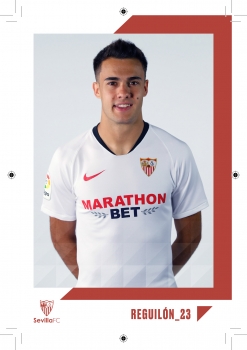 Sergio Reguilón Rodríguez (born 16 December 1996) is a Spanish professional footballer who plays as a left-back for Sevilla, on loan from Real Madrid.

Reguilón joined Real Madrid's youth setup in 2005, aged eight. On 5 August 2015, after finishing his formation, he was loaned to Segunda División B side UD Logroñés for the season.

Reguilón made his senior debut on 23 August 2015, playing the last seven minutes in a 3–0 home win against SD Compostela. The following 16 January, after being sparingly used, he returned to Los Blancos and was assigned to the reserves also in the third division.

On 23 August 2016, Reguilón returned to Logroñés also in a one-year loan deal. Now an undisputed starter, he scored eight goals during the campaign; highlights included four past Bilbao Athletic on 2 October 2016 (5–3 home win).

Upon returning to Castilla, Reguilón was a first-choice in Santiago Solari's side and renewed his contract on 11 May 2018. On 25 August of that year, he was promoted to the main squad by manager Julen Lopetegui.

He was selected for the Spain under-21 team for the first time by Luis de la Fuente Castillo for the 2019 UEFA European Under-21 Championship qualifiers against Romania and Austria. He received his first call up for the full side by Robert Moreno on 4 October 2019, for games against Norway and Sweden