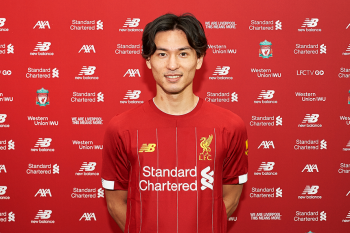 Takumi Minamino is a Japanese professional footballer who plays as an attacking midfielder or winger for Premier League club Liverpool and the Japan national team.

Japan international Takumi Minamino joined Liverpool on the first day of 2020 after five seasons of success and development with Red Bull Salzburg.

Having emerged from the youth academy at Cerezo Osaka in his home country, the versatile and gifted attacker switched to the Austrian Bundesliga in January 2015.

He went on to win the domestic title in every year of his stay with Salzburg, as well as four cup triumphs and a run to the Europa League semi-finals in 2017-18.

A multi-functional and multi-talented footballer, Minamino is a regular goalscorer too, notching 64 in his 199 appearances for his previous club and 11 in 22 international caps at the time of his move to Merseyside.

After helping Japan finish runners-up at the AFC Asian Cup, he was a standout performer during the Champions League group stage in 2019 as part of a Salzburg side that earned plaudits for their incisive, entertaining football as they pushed Liverpool all the way in the race for qualification.

None more so than in the Anfield clash between the teams, where he scored one and assisted another as the visitors fought back from three goals down in a tie they ultimately lost 4-3.

And little over a week after the return meeting in December, which the Reds won to progress to the last 16, Minamino was at Melwood to complete a medical and sign a long-term contract to join the European and world champions.

Minamino made his debut as he started Liverpool's 1-0 win over Everton in the FA Cup third round on January 5, 2020.