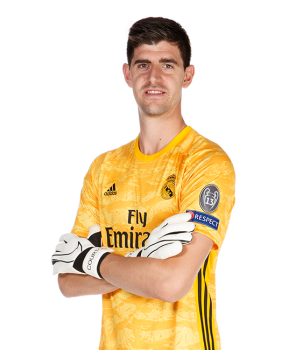 Thibaut Nicolas Marc Courtois (Born 11 May 1992) is a Belgian professional footballer who plays as a goalkeeper for the Spanish club Real Madrid and the Belgium national team.

Courtois graduated through the youth system of Genk, and aged 18, he played a key role in the team's Belgian Pro League victory. In July 2011 he joined Chelsea for a reported £8 million and was immediately loaned to Atlético Madrid. In three seasons there, he won the Europa League in 2012, the Copa del Rey in 2013, and the La Liga title in 2014. He also won the Ricardo Zamora Trophy for best goalkeeper in La Liga, for his performances in his two latter seasons. Courtois returned to Chelsea in July 2014, and in his first season, he helped them win the League Cup and the Premier League title. Two years later, he won the Premier League Golden Glove as Chelsea again won the league. Later, Real Madrid signed him for £35 million, becoming La Liga's most expensive goalkeeper, surpassing the record set by Jan Oblak.

Courtois made his senior international debut in October 2011, becoming the youngest goalkeeper to represent Belgium. He has since earned over 70 caps and appeared at the 2014 FIFA World Cup, UEFA Euro 2016 and the 2018 FIFA World Cup where he was awarded the Golden Glove as the best goalkeeper of the tournament as the Belgians came third.

Considered a highly promising prospect in his youth, Courtois subsequently established himself as one of the best players in the world in his position. Due to his wide range of skills, he has been described as a "complete goalkeeper", with few weaknesses. A consistent keeper, he possesses an excellent positional sense, good mentality, composure, strength of character, and an ability to communicate well with his defenders; he also excels in one on one situations, due to his ability to time his runs effectively when rushing out of goal to face opponents, and has even functioned as a sweeper-keeper on occasion. An excellent shot-stopper between the posts, he has also distinguished himself for his agility and quick reflexes, in spite of his size and imposing physique. Due to his height and reach, he excels in the air and is also known for his command of his area, as well as his excellent technique, anticipation, handling, and confidence when coming off his line to claim crosses. Moreover, he is known for his ability to distribute the ball to his teammates with long throws.