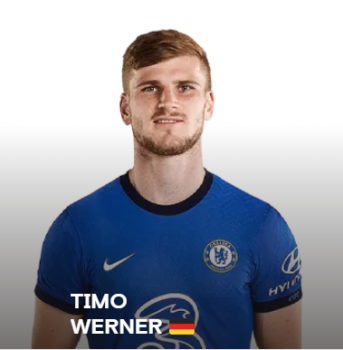 Timo Werner is a German International player who plays as a striker for English Premier League club Chelsea and the Germany national team. Timo Werner agreed his move from RB Leipzig to Chelsea in June 2020, joining up with his new team-mates for the 2020/21 season and arriving with a reputation as one of Europe’s most prolific strikers.

Werner became the youngest player ever to represent VfB Stuttgart and later became the club's youngest ever goalscorer upon making his senior debut in 2013, till he left in 2016 for Leipzig He made over 100 appearances for Stuttgart.

He joined Leipzig from Stuttgart for a then club-record fee of €10 million.

Timo 24, signed for Chelsea, he had previously enjoyed the most successful years of his career playing as a central striker with Leipzig, using his pace to run in behind defenses and craft out chances, as well as being adept at playing with his back to goal. However, he also frequently played as a winger earlier in his career and for the German national team, in addition to being used in a deeper forward role dropping into midfield to help build attacks in his final months before coming to west London.

In his last season in the Bundesliga - 2019-20 was the most prolific of his career, scoring 34 goals in 45 games in all competitions, as well as recording 13 assists. That was his fourth campaign in Leipzig, consistently reaching around 20 goals per season, although he was unable to win silverware before coming to England.