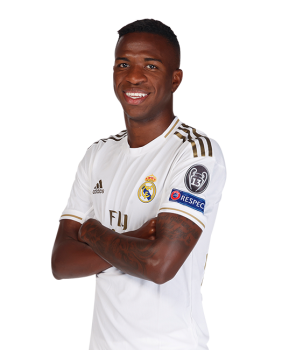 Born in the São Gonçalo, a city in the metropolitan area of Rio de Janeiro, Vinícius began his professional career at Flamengo, where he made his senior debut in May 2017, at age 16. A few weeks later, Vinícius was the subject of a transfer to La Liga club Real Madrid, for whom he signed for in a national record for a U-18 player, R$191 million (€45 million) deal, which was made effective after his 18th birthday.

Vinícius Junior's football career began in the year 2006, when his father took him to the branch offices of Flamengo, in the neighbourhood of Mutuá, in São Gonçalo where he lived. His club document described him as a left-back.

Hailing from a poor Afro-Brazilian family, Vinícius went to Abolição with his uncle, Ulisses, to shorten the distance to Ninho do Urubu (the "Vultures' Nest"). He started to receive financial aid from Flamengo as well as aid from entrepreneurs.

Between 2007 and 2010, Vinícius attended futsal classes at Flamengo's school in São Gonçalo at the Canto do Rio, a famous club located in the centre of Niterói.

In 2009, when Vinícius was nine, he took a futsal trial for Flamengo. The club noted his potential, but given his young age, he was asked to come back the following year. However, he decided he wanted to play football, not futsal and did not return. In August 2010, Vinícius passed his football tests at Flamengo.

On 23 May 2017, Spanish club Real Madrid signed a contract to acquire Vinícius, effective after his 18th birthday on 12 July 2018 (as age 18 is the minimum age for international transfer). He transferred for a reported fee of €46 million, which was at the time, the second most expensive sale of a player in the history of Brazilian football (behind only Neymar), the largest amount received by a Brazilian club for a transfer, and the highest amount ever paid by a club for a footballer under the age of 19. He was originally scheduled to return to Brazil on loan in July 2018.

On 20 July 2018, Madrid officially presented Vinícius as a Real Madrid player. He was issued squad number 28. He made his debut on 29 September 2018, coming in as an 87th-minute substitute in a goalless draw against Atlético Madrid, becoming the first-ever Madrid senior player to be born in 2000. Vinícius made his first start on 31 October in a 4–0 Copa del Rey away victory against Melilla, contributing with an assist for both Marco Asensio and Álvaro Odriozola in what Marca recognised as a Man of the Match performance. He scored his first goal on 3 November, 10 minutes after coming on as a substitute in a 2–0 victory against Real Valladolid. He scored 4 goals between his debut on 29 September 2018 and 7 February 2019.

On 1 March 2020, he scored the first goal in a 2–0 win for Real in El Clásico against FC Barcelona