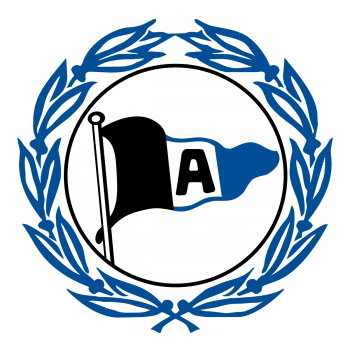 Arminia Bielefeld is a German sports club from Bielefeld, North Rhine-Westphalia. Armenia offers the sports of football, field hockey, figure skating, and cue sports. The club has 12,000 members and the club colours are black, white and blue.

The club is most commonly known for its professional football team that plays in the 2. Bundesliga and mostly played in the first or second tier of the German football league system, among them 17 seasons in the 1. Bundesliga to which they return in the 2020–21 season.

Arminia has been playing their home games at the Bielefelder Alm Stadium with a capacity of 27,300.

There is a traditional rivalry with SC Preußen Münster. The earlier rival was VfB 03 Bielefeld from the east of Bielefeld, but the rivalry deceased with the meaning of VfB Bielefeld and nowadays friendly matches between Arminia and VfB Fichte Bielefeld, as the club nowadays is called, take place every year.

Another rival is VfL Bochum, especially since the late 90s, and there was some sort of "fashion rivalries" with other clubs from the Ruhr because that area also belongs to Westphalia.

For many fans, this friendship also involves friendly ties to Hannover 96, whose fans share a friendship with Hamburg as well. All three clubs are sometimes dubbed the "Nordallianz", despite the fact that Bielefeld (other than Hamburg and Hannover) is not located in what is considered Northern Germany.