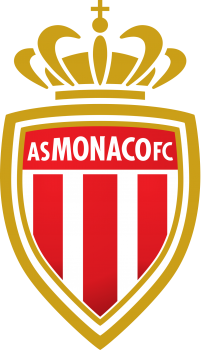 Association Sportive de Monaco Football Club SA commonly referred to as AS Monaco or Monaco, is a Monégasque professional football club that competes in Ligue 1, the top tier of French football.

The team plays its home matches at the Stade Louis II in Fontvieille with a capacity of 18,523.

Though based in Monaco, the club plays in the French football league system. Monaco is one of the most successful clubs in French football, having won eight league titles and five Coupe de France trophies. The club has also competed in European football and were runners-up in the UEFA Cup Winners' Cup in 1992 and the UEFA Champions League in 2004.

The club's traditional colors are red and white, and the club is known as Les Rouges et Blancs (The Red and Whites). Monaco is a member of the European Club Association. In December 2011, two-thirds of the club was sold to an investment group led by Russian billionaire Dmitry Rybolovlev. With Rybolovlev's financial backing, the club quickly returned to Ligue 1 and won the 2016–17 Ligue 1, their first league title in 17 years.

Although Monaco is an independent state, it is neither affiliated to the UEFA nor FIFA due to its small size. As a result, AS Monaco has no domestic league to play in its home country, resulting in it being expatriated into the French league system. AS Monaco is a full member of said French league pyramid, enabling it to represent France in European competitions. There are several other expatriated football clubs in operation around Europe, although AS Monaco is unique in that it represents a nation not a member of the international organizations. Although Vaduz among other Liechtenstein clubs play in the Swiss league system due to Liechtenstein not having a league, those clubs do have a domestic cup in their home country and qualify for European football that way. Two other microstates in Europe have teams playing abroad, Andorra and San Marino although those clubs are separate from existing domestic league infrastructures.