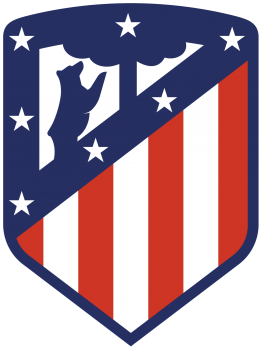 Atlético's home kit is red and white vertical striped shirts, with blue shorts, and blue and red socks. This combination has been used since 1911. Throughout their history, the club has been known by several nicknames, including Los Colchoneros ("The Mattress Makers"), due to their first team stripes being the same colors as traditional mattresses. During the 1970s, they became known as Los Indios, which some attribute to the club's signing several South American players after the restrictions on signing foreign players were lifted. However, there are several alternative theories which claim they were named so because their stadium was "camped" on the river bank, or because Los Indios (The Indians) were the traditional enemy of Los Blancos (The Whites), which is the nickname of the club's city rivals, Real Madrid. Felipe VI, the king of Spain, has been the honorary president of the club since 2003.

The club co-owned the Indian Super League franchise in Kolkata, formerly named Atlético de Kolkata, which won the competition twice, but in 2017 Atlético decided to end its franchise partnership with the ISL club due to broken commitments. Atlético also co-owns Liga MX club Atlético San Luis, and the Canadian Premier League side Atlético Ottawa, and is partnered with ISL club Jamshedpur FC, with whom it shares technical support.

Real Madrid and Atlético Madrid are clubs with contrasting identities and different fates. While Real Madrid's Santiago Bernabéu Stadium proudly rises on Paseo de la Castellana in the wealthy Chamartín neighborhood of northern Madrid, Atlético's former stadium, the less glamorous Vicente Calderón Stadium, stood in the central- south of Madrid,1,8 km from the city center in the working-class barrio of Arganzuela. Historically, Real Madrid has long been seen as the establishment club. On the other side, Atlético Madrid was always characterized by a sentimiento de rebeldía, a sense of rebellion, although during the early Francisco Franco years, it was Atlético that was the preferred team of the regime. They were associated with the military airforce (renamed Atlético Aviación) until the regime's preferences moved towards Real Madrid in the 1950s.

Certainly, the dictatorial state sought to make political capital out of Real Madrid's European Cup trophies at a time when Spain was internationally isolated; "Real Madrid are the best embassy we ever had", said Franco's foreign minister Fernando Maria de Castiella. Such perceptions have had an important impact on the city's footballing identities, tapping into the collective consciousness. In this vein, Atlético fans were probably the originators, and are the most frequent singers, of the song, sung to the tune of the Real Madrid anthem, "Hala Madrid, Hala Madrid, el Equipo del Gobierno, la vergüenza del país", "Go Madrid, go Madrid, the government's team, the country's shame."

Until recently, Atlético Madrid had struggled significantly in the derby, carrying a 14-year winless streak into the 2012–13 season. This spell ended, however, on 17 May 2013 after Atlético beat their city rivals 2–1 at the Santiago Bernabéu in the final of the Copa del Rey, and continued on 29 September 2013 when they won a 1–0 victory, again at the Bernabéu.

More recently, a heated rivalry has emerged between Atlético Madrid and Barcelona, which is also considered one of the "Classics" of Spanish football. This rivalry has become notorious after Antoine Griezmann departed from the Madrid club to the Catalan club. However, by tradition and current affairs, the greatest rivalry is that which exists with its "merengues" neighbors.

La Liga: Saul Stars For Atletico In 1-0 Win Over Osasuna

Transfer: Depay On Verge Of Joining Atletico Madrid From Barca