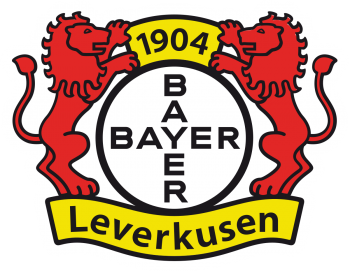 Bayer 04 Leverkusen Fußball GmbH, also known as Bayer 04 Leverkusen, Bayer Leverkusen, or simply Bayer, is a German professional football club based in Leverkusen in the state of North Rhine-Westphalia. The club competes in the Bundesliga, the top tier of German football, and plays its home matches at the BayArena.

The club was founded in 1904 by employees of the German pharmaceutical company Bayer AG, whose headquarters are in Leverkusen and from which the club draws its name. It was formerly the best-known department of TSV Bayer 04 Leverkusen, a sports club whose members also participate in athletics, gymnastics, basketball, and other sports including the RTHC Bayer Leverkusen (rowing, tennis, and hockey). In 1999 the football department was separated from the sports club and is now a separate entity formally called Bayer 04 Leverkusen GmbH. Bayer was first promoted to the Bundesliga in 1979 and has remained in the top division ever since. The club's main colors are red and black, both having been used as the main shirt color and with red and black stripes also having been used as home colors.

Bayer Leverkusen has finished five times runner-up in the Bundesliga without winning the competition, a record in German football. The club has won one DFB-Pokal and one UEFA Cup. Bayer also finished runner-up in the 2001–02 UEFA Champions League, falling 2-1 to Real Madrid in the final. Their local rivals are 1. FC Köln.

In contrast to many other German football clubs, which hold close ties to their working-class roots, Bayer Leverkusen strives for a clean, family-friendly image. The BayArena has the reputation of being one of the most family-friendly football stadiums in Germany. Ironically, Bayer 04 was the first Bundesliga club whose fans identified themselves as Ultras and the city of Leverkusen is one of the old industrial cities of Germany.

Bayer Leverkusen is perceived by some to have an ongoing image problem of a different sort. Although they are a financially healthy club with a stable of strong players, many fans of the traditional clubs denounce Bayer Leverkusen as being a "plastic club" without traditions or a committed fan base, existing solely as a creation of their rich pharmaceutical company sponsor – Bayer AG. As a result, the club and their fans have started to emphasize their industrial origins with pride, calling themselves "Werkself" (Eng. "Factory team", "Millhanders") or "Pillendreher" (Eng. "Tablet twisters").

Bayer Leverkusen's corporate origins, however, are far from unique. Other clubs, including PSV, Carl Zeiss Jena, and Sochaux, share a similar reputation of being works teams. As distinguished from the various Red Bull teams (Salzburg, New York, and Leipzig) which have been established or redefined in the recent past primarily for commercial reasons, the formation of Bayer Leverkusen was motivated by the idea of promoting the living conditions of local factory workers early in the 20th century. In view of this tradition, UEFA allows Bayer Leverkusen to use the brand name Bayer in European club competitions while disallowing such naming practices most notably to Red Bull Salzburg.

UCL: Atleti Drop To Europa League Despite Draw Against Leverkusen