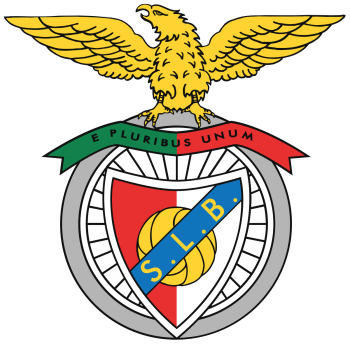 Sport Lisboa e Benfica, commonly known as Benfica, is a professional football club based in Lisbon, Portugal, that competes in the Primeira Liga, the top flight of Portuguese football, where they are the current champions and the most successful team in terms of overall titles.

Founded on 28 February 1904 as Sport Lisboa, Benfica is one of the "Big Three" clubs in Portugal that have never been relegated from Primeira Liga, along with rivals Sporting CP and FC Porto. Benfica is nicknamed As Águias (The Eagles), for the symbol atop the club's crest, and Os Encarnados (The Reds), for the shirt colour.

Since 2003, their home ground has been the Estádio da Luz, which replaced the larger, original one, built-in 1954. Benfica is the most supported Portuguese club and the European club with the highest percentage of supporters in its own country, having over 230,000 members and an estimated 14 million supporters worldwide. The club's anthem, "Ser Benfiquista", refers to Benfica supporters, who are called benfiquistas. "E pluribus unum" is the club motto; Águia Vitória, the mascot. Benfica is honored with three Portuguese Orders: those of Christ (Commander), of Prince Henry (Honorary Member) and of Merit (Officer).

With 83 major trophies won – 84 including the Latin Cup – Benfica is the most decorated club in Portugal. They have won 80 domestic trophies: a record 37 Primeira Liga titles, a record 26 Taça de Portugal, a record 7 Taça da Liga, 8 Supertaça Cândido de Oliveira, and 3 Campeonato de Portugal. Internationally, they won back-to-back European Cups in 1961 and 1962 – a unique feat in Portuguese football – and were runners-up at the Intercontinental Cup in 1961 and '62, at the European Cup in 1963, '65, '68, '88, and '90, and at the UEFA Cup/Europa League in 1983, 2013 and '14. Benfica's ten European finals are a domestic record and ranked seventh all-time among UEFA clubs in 2014. Moreover, Benfica holds the European record for the most consecutive wins in the domestic league and the record for the longest unbeaten run in Primeira Liga, where they became the first undefeated champions, in 1972–73.

Benfica was ranked 12th in the FIFA Club of the Century and 9th in the IFFHS Top 200 European clubs of the 20th century. Currently, Benfica is ranked 7th in the UEFA all-time club ranking, 20th in the UEFA club coefficient rankings, and has the second most participation in the European Cup/UEFA Champions League (39). In this tournament, they hold the overall record for the biggest aggregate win, achieved in 1965–66.

UCL: Real Madrid Only Spanish Team In Round Of 16 [FULL LIST]

UCL: Ajax's Haller Scores On Both Ends In Draw Against Benfica

Koeman Face Litmus Test Against Benfica Ahead Of Atleti's Trip