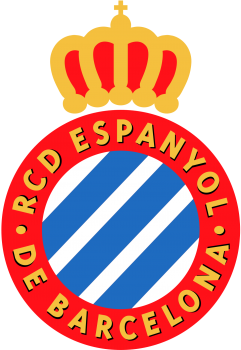 Founded in 1900, the club plays in La Liga, the highest division of Spanish football, and play their home games at the RCDE Stadium, which holds up to 40,000 spectators. Espanyol has won the Copa del Rey four times, most recently in 2006, and reached the UEFA Cup final in 1988 and 2007. The team competes in the Barcelona Derby against FC Barcelona.

Initially known as the Sociedad Española de Football on its foundation, one year later the name to the Club Español de Fútbol. In 1906, the club folded due to financial reasons, and most of the players joined the X Sporting Club. This club won the Campionat de Catalunya three times between 1906 and 1908. In 1909, the club was effectively relaunched as the Club Deportivo Español, and in 1910, they adopted their present-day colors. Espanyol is one of several Spanish football clubs granted patronage by the Spanish crown and thus entitled to use Real in their names and the royal crown on their badge. This right was granted to Espanyol in 1912 by Alfonso XIII and the club subsequently became known as the Real Club Deportivo Español.

Following the abdication of the same king in 1931 and the declaration of the Second Spanish Republic, due to the prohibition of royal symbols, the club adopted the more Catalan/republican friendly name, Club Esportiu Espanyol. After the Spanish Civil War, the name reverted.

The club took the Catalan spelling for its name in February 1995. The word "Deportiu" in Reial Club Deportiu Espanyol de Barcelona is a Catalanised form of the original word "Deportivo" (Castilian), despite the correct word being "Esportiu" in the Catalan language. This choice was made in order to retain the initials "RCD" in the club's name.

After Pochettino left in 2012, the club maintained themselves in the top flight under a series of other managers. In January 2016, Chinese businessman Chen Yansheng took over the club by acquiring a 54% stake. In the 2018–19 season Espanyol finished 7th, thus returning to the Europa League for the first time since their final run in 2006–07.

In the first half of the 20th century during the Miguel Primo de Rivera dictatorship (1923–1930), FC Barcelona was seen as a symbol of Catalan identity. This contrasted with RCD Espanyol which cultivated a kind of compliance with the central authority.

In 1918 the municipalities of Catalonia promoted a campaign to ask the Spanish Government for a Statute of Autonomy. FC Barcelona joined that request and the Catalan press recognized FC Barcelona as a major cultural arm of the Catalan independence movement. The city's other team, RCD Espanyol, dissociated itself from the claim due to the former's success on the European stage.

Today FC Barcelona is the club that is closer to the political powers in Catalonia. Its past presidents have linked the club with the Catalan independence movement and the holding of a referendum, even though this causes discomfort among some Catalonian fans and those in the rest of Spain who feel neglected and think the team is biased against them. Although some of RCD Espanyol's directors have expressed their independentist ideology the club stays out of politics. It is believed that most of the team's fans are against the independence of Catalonia.

On numerous occasions, RCD Espanyol has complained of unfavorable and sometimes directly offensive treatment towards the club in favor of FC Barcelona by some Catalonian public media like

Despite these differences in ideology, the derbi (derby) has always been more relevant to Espanyol supporters than those of Barcelona due to the difference in objectives.

Though it is the most played local derby in the history of La Liga, it is also the most unbalanced, with Barcelona overwhelmingly dominant. In the league table, Espanyol has only managed to finish above Barça on three occasions in almost 70 years and the only all-Catalan Copa del Rey final was won by Barça in 1957. Espanyol has the consolation of achieving the largest margin win with a 6–0 victory in 1951.

Espanyol achieved a 2–1 win against Barça during the 2008–09 season, becoming the first team to defeat Barcelona at Camp Nou in their treble-winning season.