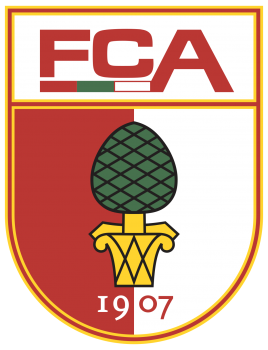 Fußball-Club Augsburg 1907 e. V., commonly known as FC Augsburg or Augsburg, is a German football club based in Augsburg, Bavaria.

FC Augsburg plays in the Bundesliga, the top tier of the German football league system.

The team was founded as Fußball-Klub Alemania Augsburg in 1907 and played as BC Augsburg from 1921 to 1969. With over 17,400 members, it is the largest football club in Swabian Bavaria.

The club has spent most of its history fluctuating between the second and third divisions, with disappointment striking in the early 2000s when Augsburg was relegated to the fourth division for two seasons. However, the club experienced a surge following this setback and was eventually promoted to the Bundesliga for the first time in 2011, where it has remained since. Augsburg made their European debut in the 2015–16 UEFA Europa League, with the club reaching the Round of 32 before being knocked out by Liverpool.

Augsburg maintains fierce local rivalries with Ingolstadt and TSV 1860 Munich. Matches between these clubs typically attract large crowds, and a match in 1973 at 1860 Munich set the all-time spectator record for the Olympic Stadium.