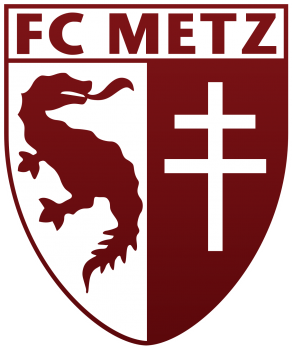 Football Club de Metz commonly referred to as FC Metz or simply Metz is a French association football club based in Metz, Lorraine.

The club was formed in 1932 and plays in Ligue 1, the first level in the French football league system.

Metz plays its home matches at Stade Saint-Symphorien with a capacity of 25,636 located within the city.

FC Metz has never won the French championship; its best result was a second-place finish in 1998, behind RC Lens. The title race lasted until the ultimate fixture, however, Metz never recovered from a 0–2 loss against Lens on their home turf. Metz won the Coupe de France twice, in 1984 and 1988, the first of these victories enabled it to qualify for the European Cup Winners' Cup where it achieved arguably the team's greatest moment, an upset of FC Barcelona in the first round of the competition in October 1984. It lost 4–2 at home in the first leg but won 4–1 away in the return leg, thus qualifying 6–5 on aggregate, making the FC Metz unique among the French teams who have beaten Barcelona at the Nou Camp. FC Metz also won the Coupe de la Ligue twice, in 1986 and 1996, and has made a total of ten appearances in European tournaments.

Ligue 1: Messi To Miss Metz's Trip As A Result Of Bone Bruise