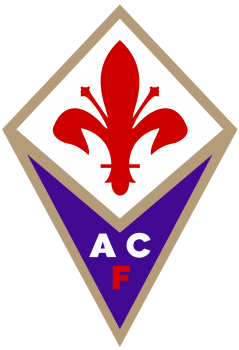 ACF Fiorentina, commonly referred to as Fiorentina, is an Italian professional football club based in Florence, Tuscany. Founded by a merger in August 1926, and refounded in August 2002 following bankruptcy, Fiorentina has played at the top level of Italian football for the majority of their existence; only four clubs have played in more Serie A seasons.

Fiorentina has won two Italian Championships, in 1955–56 and again in 1968–69, as well as six Coppa Italia trophies and one Supercoppa Italiana. On the European stage, Fiorentina won the UEFA Cup Winners' Cup in 1960–61 and lost the final one year later. They finished runners-up in the 1956–57 European Cup, losing against Real Madrid, and also came close to winning the 1989–90 UEFA Cup, finishing as runners-up against Juventus after losing the first leg in Turin and drawing in the second one in Avellino.

Since 1931, the club has played at the Stadio Artemio Franchi, which currently has a capacity of 43,147. The stadium has used several names over the years and has undergone several renovations. Fiorentina is known widely by the nickname Viola, a reference to their distinctive purple colors.

Serie A: Own Goal Salvages Win For AC Milan Against Fiorentina

Serie A: Juventus Escape Defeat By Whiskers Against Fiorentina

Vlahovic Sends Juventus Past Sassuolo To Face Fiorentina In Semifinal