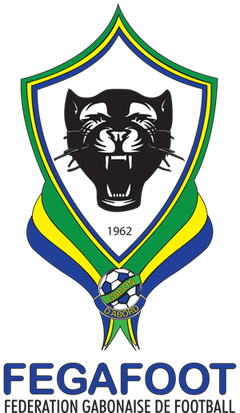 The Gabon national football team also known as The Panthers represents Gabon in men's international football. The team's nickname is The Brazilians and it is governed by the Gabonese Football Federation. They have never qualified for the FIFA World Cup, but have qualified eight times (as of 2021) for the Africa Cup of Nations. The team is a member of both FIFA and the Confederation of African Football Football (CAF).

In the 2010 Africa Cup of Nations, Gabon upset Cameroon 1–0 and had a good chance of progressing to the quarter-finals after a scoreless draw against Tunisia. However, Gabon lost 2–1 to Zambia as it finished in its group with a three-way tie with Zambia and Cameroon. Gabon only scored twice in the group stage and was eliminated on the goals scored tiebreaker. In the 2012 Africa Cup of Nations, Gabon co-hosted the tournament as it won their group matches: 2–0 against Niger, 3–2 against Morocco, and 1–0 against Tunisia. The second match saw Gabon qualify for its first quarter-final since 1996 in the most dramatic circumstances. Gabon had come back to lead 2–1 only for Morocco to tie the match in early stoppage time. However, on the final play of the game, Gabon scored in the eighth minute of stoppage time, from a direct free kick. Eventually, Gabon lost 5–4 in penalties (1–1 a.e.t) in the quarterfinal against Mali, after a penalty missed by Pierre-Emerick Aubameyang, who had scored three goals in the tournament.

Gabon began its 2014 World Cup qualifying campaign in the second round in Group E as it was drawn with Niger, Burkina Faso, and Congo. Despite opening its campaign with a scoreless draw against Niger, Gabon lost 3–0 due to having fielded ineligible player Charly Moussono. After four qualifiers, Gabon scored only one goal, but thanks to an Aubameyang hat-trick on June 15, 2013, Gabon stayed in contention for a playoff berth with a 4–1 victory over Niger. However, Burkina Faso eliminated Gabon in the final qualifier with the 1–0 result as Gabon finished third in its group.

For the 2013 Africa Cup of Nations, Gabon has been drawn to qualify against Togo. Even though Daniel Cousin scored in each leg against Togo, Gabon missed out on the 2013 Africa Cup of Nations as it lost 3–2 on aggregate. A year later, Gabon played six qualifiers for the 2015 Africa Cup of Nations as it was drawn with Burkina Faso, Angola, and Lesotho. Despite a stunning 1–1 result in Lesotho in qualifying, Gabon finished ahead of Burkina Faso to top the group as it qualified for the tournament with a game to spare in Angola. In January 2015, Gabon was drawn along with Burkina Faso, Congo, and Equatorial Guinea. However, its 2–0 victory on the opening day of the tournament were all the points Gabon achieved during the tournament as it suffered a shocking exit in the group stage.