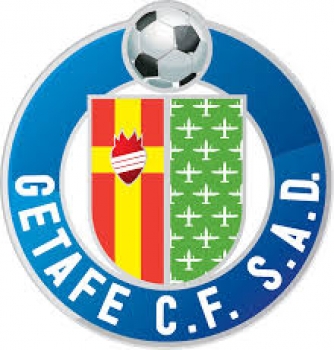 Getafe Club de Fútbol simply Getafe, is a Spanish football club based in Getafe, a city in the south of the Community of Madrid. The team competes in La Liga, the highest tier of the Spanish football system. The club's home stadium is Coliseum Alfonso Pérez which was opened in 1998 and can hold 17,393 spectators. The club was founded in 1946 and refounded in 1983.

The club's main rivalry is against neighbors Leganés, who is based near the town of Getafe, and a friendly rivalry against Atlético Madrid and Real Madrid.

The club originally played in the Campo del Regimiento de Artillería, which lacked goal posts. Shortly after, the club moved to San Isidro, housed in the current Municipal Sports Center of San Isidro. Here, Club Getafe was promoted to the third division following their victory against Villarrobledo in the 1956–57 season. Getafe was nearly promoted to the Segunda División in 1957–58 but was defeated by CD Almería.

On 2 September 1970, the club inaugurated its stadium after being promoted back to the Tercera División. Presided by chairman Francisco Vara, Las Margaritas won a 3–1 victory over Michelín. The team survived in the third level that season, and six years later gained their first promotion to the second division.

Club Getafe Deportivo played six seasons in the Segunda División, with little success. From 1976 to 1982, they placed below the tenth level for all six years.

Historically, due to their close geographical position, Getafe has always held a strong rivalry with Leganés. They played out numerous encounters in the lower division before the two teams' fortunes began to contrast as Getafe gained ascendency and Leganés began to deteriorate.

In the first division, the side has held some exciting matches in the last few years with Real Madrid, with the ledger being most recently squared at three wins each. Real Madrid's much greater stature, huge budget, and the expensive squad have never stopped Getafe from rising to the challenge and often playing their best football against their "bigger brother".

In addition to this, Getafe has developed somewhat of a rivalry with Barcelona, which culminated in their famous 4–0 victory over their more fancied opponents during the 2006–07 Copa del Rey semi-final. Also, Valencia has succumbed numerous times to el Geta, often quite heavily, as was the case during the 2006–07 Copa del Rey, which ensured Getafe's first-ever appearance in the Copa's quarter-finals with a 2–4 win at Valencia's Mestalla Stadium. However, this result was turned around in the 2008 Copa del Rey final, as Valencia would deny Getafe their first-ever trophy with a 3–1 victory. This rivalry is propped up healthily by the regular transfer of Getafe players (and head coach Quique Sánchez Flores) to Valencia.