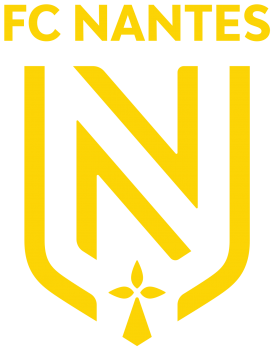 Football Club de Nantes Atlantique commonly referred to as FC Nantes or simply Nantes is a French professional football club based in Nantes in Brittany.

The club was founded on 21 April 1943, during World War II, as a result of local clubs based in the city coming together to form one large club. From 1992 to 2007, the club was referred to as FC Nantes Atlantique before reverting to its current name at the start of the 2007–08 season. Nantes play in Ligue 1, the first division of Football in France.

Nantes is one of the most successful clubs in French football, having won eight Ligue 1 titles, three Coupe de France wins, and attained one Coupe de la Ligue victory. The club is famous for its jeu à la nantaise ("Nantes-style play"), its collective spirit, mainly advocated under coaches José Arribas, Jean-Claude Suaudeau and Raynald Denoueix and for its youth system, which has produced players such as Marcel Desailly, Didier Deschamps, Mickaël Landreau, Claude Makélélé, Christian Karembeu, and Jérémy Toulalan. As well as Les Canaris (The Canaries), Nantes is also nicknamed Les jaunes et verts (The Green and Yellows) and La Maison Jaune (The Yellow House).

The club plays its Home games at the La Beaujoire-Louis Fonteneau with a capacity of 35,322.

Ligue 1: Nice Squeeze Past Nantes To Keep Hold On Second Position On Table

Ligue 1: Monaco Held To Draw By Nantes In Opening Match