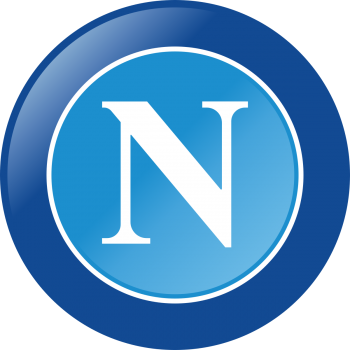 Società Sportiva Calcio Napoli commonly referred to as Napoli is an Italian professional football club based in Naples, Campania that plays in Serie A, the top flight of Italian football. The club has won two league titles, six Coppa Italia titles, two Supercoppa Italiana titles, and one UEFA Cup.

Formed in 1926, the club saw relatively little success in its early years, winning one Coppa Italia until 1965, where they were refounded. Napoli then saw increased success in the 1980s, after the club acquired Diego Maradona. During his time in Naples, Maradona helped the team win several trophies, which led to the club retiring his number 10 jersey. During this period, Napoli won their sole league titles, in 1987 and 1990. Following his departure, however, Napoli struggled financially, and endured several relegations, before being refounded in 2004 by film producer Aurelio De Laurentiis. Under his guise, the club has stabilized, which has led to renewed on-field success, winning 2012, 2014, and 2020 Coppa Italia titles.

By attendance, Napoli has the fourth biggest fanbase in Italy and was ranked as the fifth highest-earning football club in Serie A, with $182 million in revenue during the 2017–18 season. In 2018, Forbes estimated the club is the fifth most valuable club in Italy, worth $379 million. Napoli is also one of the associate members of the European Club Association.

Since 1959, the club has played their home games at Stadio San Paolo, and have traditionally worn sky blue shirts and white shorts. The club also has a long-standing rivalry with Roma, with whom they contest the Derby del Sole. The club's anthem is "'O surdato 'nnammurato".

Marek Hamšík holds Napoli's official appearance record, having made 520. He also holds the record for league appearances with 408 over 12 years from 2007 to 2019.

The all-time leading goalscorer for Napoli is Dries Mertens with 122 goals.

Diego Maradona finished the season of Serie A as the league's top scorer, known in Italy as the Capocannoniere, in the 1987–88 season with 15 goals. This achievement was matched by Edinson Cavani in 2012–13, and Gonzalo Higuaín in 2015–16.

The biggest ever victory recorded by Napoli was 8–1 against Pro Patria, in the 1955–56 season of Serie A.

On 26 July 2016, Gonzalo Higuaín became the third-highest football transfer of all-time and highest ever transfer for an Italian club[ when he signed for €90 million to Juventus.

On 23 August 2019, Napoli confirmed the signing of Hirving Lozano from PSV Eindhoven for a transfer fee of US$46.5 million (€42 million), making him Napoli's most expensive signing.

Serie A: Napoli Strengthen Hold On Third Spot With 1-0 Win Over Torino

Serie A: Napoli Level With AC Milan With 3-1 Win Over Atalanta

Serie A: Osimhen's Double Crucial For Napoli Against Udinese To Go Level At Top