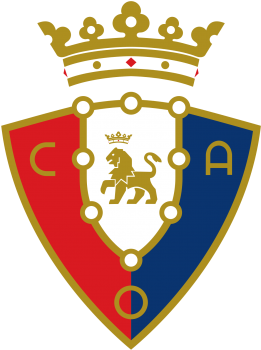 Founded on 17 November 1920, the club currently plays in La Liga, holding home games at the 18,375-capacity El Sadar Stadium. The team tends to play in a red shirt with navy blue shorts, whereas the away kit differs from season to season.

"Los Rojillos" is the club nickname, meaning "The Reds". The word "Osasuna" means "health" in Basque, used in a sense of "strength" or "vigor". For different reasons, rivalries exist between Osasuna and Real Zaragoza, Real Madrid, and some Basque clubs, particularly Athletic Bilbao.

Founded in 1920, Osasuna first reached Segunda División in 1932. They made it to La Liga three seasons later.

The club achieved its first-ever UEFA Cup qualification in 1985–86 after finishing sixth, eventually reaching the third round in the 1990–91 edition. Finishing last in 1993–94, the side spent six years in the second level. In 2005, they reached the Copa del Rey final for the first time, losing to Real Betis after extra time.

On 27 November 2005, Osasuna played their 1,000th game in La Liga. After a stellar 2005–06 domestic campaign, they made history by finishing in fourth place – equalling the best ever finish – to enter the qualifying phase for the UEFA Champions League in the following season. This achievement was made more dramatic by the suspense that was maintained until the last day of the championship in which Osasuna and Sevilla were both vying for fourth place – both eventually ended the season with the same number of points but Osasuna finished higher due to their head-to-head record. However, they did not make it to the Champions League group phase, after being eliminated by Hamburger SV in the third qualifying round, leaving the Navarrese to compete in the UEFA Cup for the fifth time.

La Liga: Saul Stars For Atletico In 1-0 Win Over Osasuna