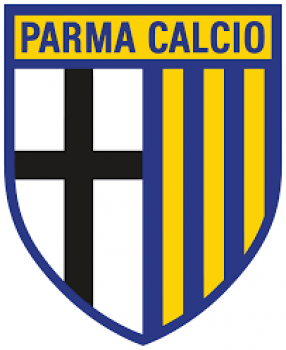 Parma Calcio 1913, commonly referred to as Parma, is an Italian football club based in Parma, Emilia-Romagna. It currently plays in Serie A.

Founded as Parma Football Club in December 1913, the club plays its home matches in the 27,906-seat Stadio Ennio Tardini, often referred to as simply Il Tardini, from 1923.

Financed by Calisto Tanzi, the club won eight trophies between 1992 and 2002, a period in which it achieved its best-ever league finish, as runners-up in the 1996–97 season. The club has won three Coppa Italia, one Supercoppa Italiana, two UEFA Cups, one European Super Cup, and one UEFA Cup Winners' Cup.

Financial troubles were brought about in late 2003 by the Parmalat scandal which caused the parent company to collapse and resulted in the club operating in controlled administration until January 2007. The club was declared bankrupt in 2015 and re-founded in Serie D but secured a record three straight promotions to return to Serie A in 2018.

Parma maintains rivalries with regional and national clubs; some of these are keenly fought local derbies. Derby dell' Enza opponents Reggiana is the club's bitterest rivals. The ill-feeling with Reggiana comes from a traditional city rivalry between Parma and Reggio Emilia. Parma contests the Derby dell' Emilia with Bologna. Bologna and Parma are Emilia-Romagna's two most decorated clubs, winning the region's only domestic titles: 7 Serie A titles and 5 Coppa Italia. Two other local derbies are the Derby dei Ducati, which is contested with neighbors Modena, and the Derby del Ducato, which is played against Piacenza. Despite their relative obscurity, the Lombardian side Cremonese and Tuscan outfit Carrarese, to Parma's north and south, respectively, are both seen as rivals too.

Juventus is considered a great rival of Parma largely due to their recent duels, which include Parma's 1995 UEFA Cup victory, its first and third Coppa Italia triumphs, Supercoppa Italiana defeats in 1995 and 2002, and its 1995 domestic cup final defeat to The Old Lady. These six matches comprise nearly half of the fourteen major finals Parma has participated in. Ironically, Parma's colors have their origins in those Juventus wears, and the switch from white and black to a yellow and blue home kit in the late 1990s took place in order to distance and distinguish Parma from Juventus. Parma maintains keenly fought rivalries with Vicenza and Genoa.

In Italy, it is common for clubs to be twinned in an arrangement called gemellaggi. This is a practice uncommon elsewhere. Parma enjoys amicable relations with Empoli in an arrangement that dates back to a game played in foggy conditions in 1984 that ended in the Parma fans congratulating those of Empoli on its win when the full-time whistle was blown without the Azzurri fans' knowledge. Perhaps a more current bond is felt towards the fans of Sampdoria.

Ibra, Buffon, Other Players Who Returned To Former Club After A Long Time

Parma Ousted From Serie A After Loss To Torino

Serie A: Pirlo Off To Winning Start As Juventus Brush Aside Sampdoria, Napoli Defeat Parma