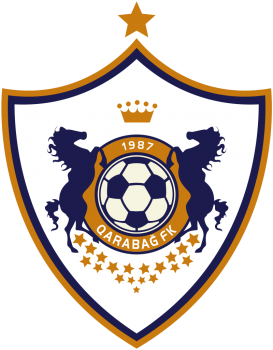 Qarabağ is an Azerbaijani professional football club playing in the Azerbaijan Premier League.

Qarabağ FK was part of the founding members of the Azerbaijan Premier League in 1992.

In the summer of 1993, they won their first league championship, becoming the first non-Baku-based club to win the Premier League title.

Qarabağ is one of the two teams in Azerbaijan, along with Neftçi PFK which has participated in all Premier League championships so far.

Later in 2014, the club won the Premier League - their first league title in 21 years.

Qarabağ became the second Azerbaijani team after Neftçi PFK to advance to the group stage of a European competition, making its first of three consecutive seasons in the UEFA Europa League group stages in 2014–15.

The club is the first Azerbaijani team to advance to the group stage of the higher UEFA Champions League, competing in the 2017–18 season.

Qarabağ has played three times in the Europa League after qualifying to the Champions League but could not go past the group stage but still made the 3rd position after Round 6 of the group stages.