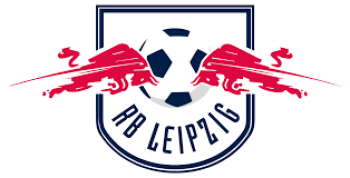 RasenBallsport Leipzig e.V., commonly known as RB Leipzig, is a German professional football club based in Leipzig, Saxony. The club was founded in 2009 by the initiative of the company Red Bull GmbH, which purchased the playing rights of fifth-tier side SSV Markranstädt with the intent of advancing the new club to the top-flight Bundesliga within eight years. The men's professional football club is run by the spin-off organization RasenBallsport Leipzig GmbH. RB Leipzig plays its home matches at the Red Bull Arena.

On 8 May 2016, RB Leipzig ensured promotion to the Bundesliga for the 2016–17 season with a 2–0 win over Karlsruher SC. One year later, RB Leipzig captured a place in the 2017–18 UEFA Champions League by finishing as runners-up in the Bundesliga.

The nickname is Die Roten Bullen (English: The Red Bulls) due to the energy drink company Red Bull being the sole investor of the club.

RB Leipzig remained undefeated in the first thirteen league matches of the 2016–17 season, breaking a record for the longest undefeated streak of a promoted team to the Bundesliga. The team finished the 11th matchday in the first place and became the first team from the area of former East Germany to hold the leading position since the 1991–92 Bundesliga season, when Hansa Rostock stood at first place on 31 August 1991 and held the position for three matchdays, relinquishing it after a loss against FC Ingolstadt.

RB Leipzig became the first Bundesliga debutant, since the German reunification, to qualify for a European tournament, following a 4–0 win against SC Freiburg on 15 April 2017. They also became the first team from the area of former East Germany to qualify for a European tournament, since 1. FC Union Berlin qualified for the 2001–02 UEFA Cup. Subsequently, Leipzig managed to qualify for the 2017–18 UEFA Champions League after beating Hertha BSC 4–1 at the Olympiastadion on 6 May 2017, two days before the anniversary of the club's promotion to Bundesliga.

The following season, Leipzig finished in 6th position and reached the quarterfinals of the 2017–18 UEFA Europa League competition, after being transferred from the 2017–18 UEFA Champions League group stage, which was finished in 3rd position. On 16 May 2018, Ralph Hasenhüttl resigned as head coach, after an extension of his contract was denied. Before the next season, Rangnick was announced as a new coach for one year, to be followed by Julian Nagelsmann by the beginning of the 2019–20 season. RB Leipzig finished the 2018–19 Bundesliga season in 3rd position, with a total of 66 points. This ensured them qualification in the 2019–20 UEFA Champions League. In addition, a win against Hamburger SV on 23 April 2019, RB Leipzig reached the DFB-Pokal final for the first time, where they faced Bayern Munich on 25 May. RB Leipzig was defeated by Bayern Munich 3–0. On 1 June 2019, Rangnick announced his resignation as sporting director of RB Leipzig after seven years and moved to the Red Bull company as "Head of Sport and Development Soccer". His successor as a sporting director is Markus Krösche.

In the 2019–20 UEFA Champions League, RB Leipzig managed to win their group ahead of Lyon, Benfica and Zenit Saint Petersburg, and to reach the quarterfinals for the first time in their history, after beating Tottenham Hotspur 4–0 on aggregate in the Round of 16.

Nkunku To Miss World Cup Due To Sprain — France