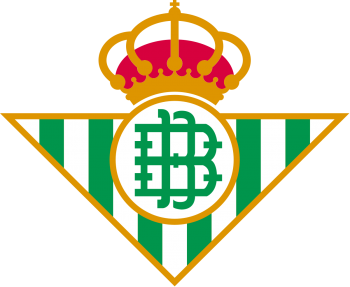 Real Betis Balompié, S.A.D., more commonly referred to as Real Betis or Betis, is a Spanish professional football club based in Seville in the autonomous community of Andalusia. Founded on 12 September 1907, it plays in La Liga, having won the Segunda División in the 2014–15 season. It holds home games at Estadio Benito Villamarín in the south of the city with a 60,720-seat capacity.

Real Betis won the league title in 1935 and the Copa del Rey in 1977 and 2005. Given the club's tumultuous history and many relegations, its motto is ¡Viva el Betis manque (Aunque) pierda! ("Long live Betis even when they lose!").

Despite a brief return to the top division which lasted only one season, the club continued to decline and in 1947 the worst fears were reached when they were relegated to Tercera División. Many fans see the ten years they spent in the category as key to the "identity" and "soul" of the club. During this time, Betis earned a reputation for filling its stadium and having massive support at away matches, known as the "Green March".

When the side returned to the second level in 1954, it gained the distinction of being the only club in Spain to have won all three major divisions' titles. Much of the credit for guiding Betis through this dark period and back into the Segunda lies with chairman Manuel Ruiz Rodríguez.

On 25 June 1977, Betis played Athletic Bilbao at the Vicente Calderón Stadium in the Copa del Rey final. The match finished 2–2, with Betis winning 8–7 after a staggering 21 penalties taken. This rounded off a solid season in which the club finished fifth in the league.

After that triumph, Betis competed in the European Cup Winners' Cup: after knocking out Milan 3–2 on aggregate in the first round, the side reached the quarter-finals, where they lost to Dynamo Moscow. Despite their strong performance in Europe, the team suffered League relegation.

The following year, Betis returned to the top flight and ushered in a period of "good times" for the club, with the next three seasons seeing three top-six finishes, as well as UEFA Cup qualification in 1982 and 1984.

La Liga: Felix's Brace Atleti Back Into Top 4 With Victory Over Real Betis