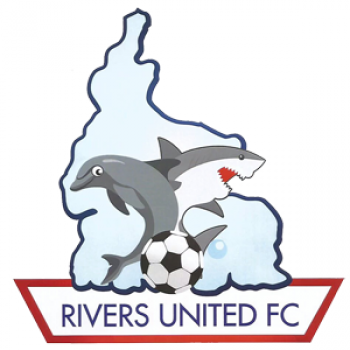 Rivers United Football Club is a professional football club based in Port Harcourt, Rivers State that participates in the Nigerian Professional Football League, the highest level of domestic Nigerian football.

Rivers United is a composite team with the merger of Sharks F.C. and Dolphins F.C.

The team crest contains both a shark and a dolphin as a result of the merge.

Nickname(s): The Pride of Rivers

The club finished second in the 2016 Nigerian Premier League which qualified them for the 2017 CAF Champions League for the first time. A four-goal second-leg win over Mali's AS Bamako with Esosa Igbinoba and Bernard Ovoke each scoring braces put Rivers past the preliminary round.

However, they were eliminated by Sudan's Al-Merrikh 4–3 on aggregate in the first round after losing a 3–0 first-round lead.

Rivers United has had a fair cast of famous Nigerian players including Victor Ezeji who holds the record of enjoying the longest career spell of 20 years in the NPFL.

Others are Sunday Rotimi, a former Super Eagles goalkeeper, Kelechi Osunwa, a junior international who also had brief calls to the Super Eagles and former long term captain, Ahmed Abdulrahman.