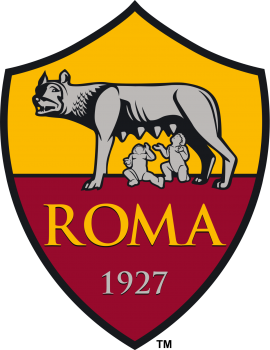 Associazione Sportiva Roma commonly referred to as Roma is an Italian professional football club based in Rome. Founded by a merger in 1927, Roma has participated in the top-tier of Italian football for all of their existence except for 1951–52.

Since 1953, Roma has played their home matches at the Stadio Olimpico, a venue they share with city rivals, Lazio. With a capacity of over 72,000, it is the second-largest of its kind in Italy, with only the San Siro able to seat more. The club plan to move to a new stadium, though this is yet to start construction.

The club's home colors are Tyrian purple and gold, which gives Roma their nickname "I Giallorossi" ("The Yellow and Reds"). These colors have often been combined with white shorts. Their club badge features a she-wolf, an allusion to the founding myth of Rome.

In Italian football, Roma is a club with many rivalries; first and foremost is their rivalry with Lazio, the club with whom they share the Stadio Olimpico. The derby between the two is called the Derby Della Capitale, it is amongst the most heated and emotional footballing rivalries in the world. The fixture has seen some occasional instances of violence in the past, including the death of Lazio fan Vincenzo Paparelli in 1979–80 as a result of an emergency flare fired from the Curva Sud, and the abandonment of a match in March 2004 following unfounded rumours of a fatality which led to violence outside the stadium.

Against Napoli, Roma also competes in the Derby del Sole, meaning the "Derby of the Sun". Nowadays, fans also consider other Serie A giants like Juventus (a rivalry born especially in the 1980s), Milan and Internazionale (increased in recent years) among their rivals, as these four compete for the top four spots in the league table to secure a spot in the UEFA Champions League.

Serie A: Osimhen, Simeone Edge Napoli Past Roma, In Sight Of Title

Serie A: Abraham Rescues Roma From Defeat Against Juventus

Serie A: Allegri Hails Mourinho Ahead Of Juventus, Roma Clash