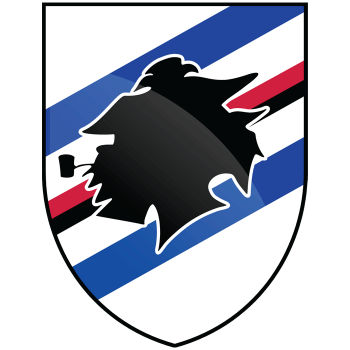 Unione Calcio Sampdoria, commonly referred to as Sampdoria, is an Italian professional football club based in Genoa, Liguria.

The club was formed in 1946 from the merger of two existing sports clubs whose roots can be traced back to the 1890s, Sampierdarenese and Andrea Doria.

Both the team name and jersey reflect this, the first being a combination of the former names, the second incorporating the former teams' colors (blue-white and white-red-black) in a single design. The team's colors are blue with white, red and black hoops, hence the nickname blucerchiati ("blue-circled"). Sampdoria plays at Stadio Luigi Ferraris, capacity 36,536 which shares with Genoa's other club, Genoa Cricket, and Football Club. The derby between the two teams is commonly known as the Derby Della Lanterna.

Sampdoria supporters come mainly from the city of Genoa. The biggest group are Ultras Tito Cucchiaroni, named after an Argentinian left winger who played for Sampdoria. The group was founded in 1969, making it one of the oldest ultra groups in Italy. They are apolitical, although there are smaller groups like Rude Boys Sampdoria, who are left-wing. The main support with flags and flares comes from the southern Curva, Gradinata Sud.

Sampdoria's biggest rivals are Genoa, against whom they play the Derby Della Lanterna. When Sampdoria was relegated from Serie A in 2011, more than 30,000 Genoa supporters staged a mock funeral procession through the streets of the city carrying a coffin draped in blue.

Serie A: Dybala Injury Blow To Juventus In First Home Win Against Sampdoria

Serie A: Milan Without Ibra Scrape 2-1 Win Against Sampdoria

Serie A: Pirlo Off To Winning Start As Juventus Brush Aside Sampdoria, Napoli Defeat Parma