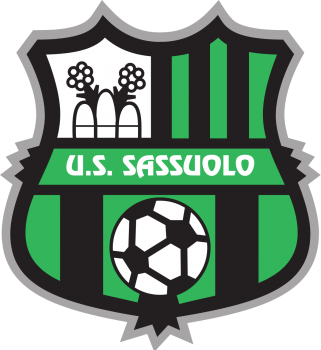 Unione Sportiva Sassuolo Calcio commonly referred to as Sassuolo is an Italian football club based in Sassuolo, Emilia-Romagna. Their colors are black and green, hence the nickname Neroverdi.

Founded in 1920, Sassuolo has played in Serie A from the 2013–14 season, joining a select group of teams playing in the Serie A but not belonging to a provincial capital city: Empoli, Legnano, Pro Patria, Carpi and Casale.

During pre-season training, Sassuolo won the TIM Trophy after losing to Juventus on penalties then beating Milan 2–1, marking the first time a team other than Milan, Internazionale, or Juventus have won the Cup.

On 25 August 2013, Sassuolo played their first-ever Serie A match, a 2–0 loss away at Torino. The team's second match was their first at home, against Livorno, where striker Simone Zaza scored Sassuolo's first top-flight goal as they lost 4–1. On 22 September 2013, Sassuolo endured a heavy 7–0 defeat at home to Internazionale. The team earned their first point in their fifth match, on 25 September away to Napoli. Zaza equalized as the game finished 1–1, ending the hosts' perfect start to the season. This was followed by a first home point on 29 September, a 2–2 draw with Lazio. On 20 October 2013, Sassuolo won their first Serie A game, defeating Bologna 2–1 at home with goals from Domenico Berardi and Antonio Floro Flores, moving the club off bottom place. Sassuolo won away for the first time in Serie A on 3 November against Sampdoria, with Berardi scoring their first top-flight hat-trick to win 4–3. Since the following match, a 1–1 draw at Roma on 10 November, the club has been outside the relegation zone. On 12 January 2014, Berardi was the only player in the season to score four goals in a game, as Sassuolo came from 2–0 down to win 4–3 against Milan. Towards the end of January 2014, Sassuolo was in bottom place and so manager Di Francesco was relieved of his duties and Alberto Malesani was brought in. The managerial change did not have the desired effects and so in early March, Sassuolo re-entrusted the side to the management of Di Francesco. Sassuolo won it away match against Fiorentina 4–3 on 6 May 2014, and after winning 4–2 against Genoa on 11 May, Sassuolo guaranteed its place in Serie A for the 2014–15 season. Berardi finished in equal 7th place in the Serie A top scorers list, with 16 goals for the season.

The Neroverdi had a much better 2014–15 Serie A season, finishing comfortably beyond relegation in 12th place. Berardi was once more the club's top goalscorer with 15 league goals.

Sassuolo improved again in the 2015–16 Serie A season, finishing ahead of the likes of Milan and Lazio in sixth place. The season included an opening day win over Napoli, a Round 10 1–0 victory over Juventus at Mapei Stadium, and a 1–0 victory over Inter at the San Siro.

On 21 May 2016, Sassuolo achieved its first-ever Europa League qualification after finishing sixth in Serie A courtesy of a Juventus Coppa Italia win over Milan as Milan would have gone to Europe instead if they had won the final. On 25 August 2016, Sassuolo qualified for the Europa League group stage after beating Red Star Belgrade 4–1 on aggregate in the playoff round

AC Milan Crowned Serie A Champions, First In 11 Years With 3-0 Win Over Sassuolo

Vlahovic Sends Juventus Past Sassuolo To Face Fiorentina In Semifinal

Serie A: Mourinho's 1000th Game Ends With Win In Stoppage Time For Roma

Inter In Sight Of Serie A Trophy With Sassuolo Defeat

Inter vs Sassuolo Set For April After International Break