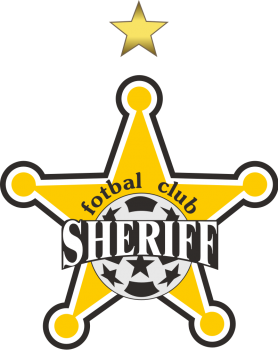 Sheriff is a Moldovan football club based in Tiraspol, a city located in the de jure unrecognized Pridnestrovian Moldavian Republic.

Sheriff also known as "The Wasps" recorded their debut in the first league in the 1998–99 season, when they also won their first trophy, the Moldovan Cup.

They have since amassed 19 championship titles, ten Cups and seven Super Cups–all competition records. On the European stage, Sheriff has reached the group stage of the UEFA Europa League on four occasions and became the first ever Moldovan side to reach the group stages of the UEFA Champions League in 2021.

The club takes its current name from the main sponsor, a company that operates various industries in the breakaway state. Home games are played in yellow and black kits at the Sheriff Stadium, to which the club moved in 2002 and has a capacity of 12,746 persons.

From 2001–02 to 2008–09, the club tried to reach the group stage in the UEFA Champions League every year but failed in the second qualifying round every time.

Its European fortunes improved after 2009. Sheriff has appeared in three UEFA Europa League group stages (2009–10, 2010–11, 2013–14) with decent results, although they didn't manage to qualify to the knock-out stage. In 2017, they qualified to the group stage for the fourth time, after beating favourites Legia Warsaw on away goals in the play-off round.

In the 2021–22 UEFA Champions League, Sheriff became the first Moldovan team to qualify for the group stages of the competition after a 3–0 aggregate win over Dinamo Zagreb. They have drawn into Group D to face Inter Milan, Real Madrid and Shakhtar Donetsk.