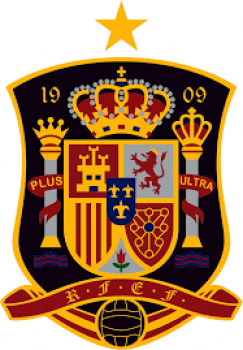 Spain national football team has represented Spain in international men's football competition since 1920. It is governed by the Royal Spanish Football Federation, the governing body for football in Spain.

The Spanish team is commonly known by fans as "La Furia Roja", meaning the Red Fury in Spanish

Spain is one of the eight national teams to have been crowned worldwide champions, having participated in a total of 15 of 21 FIFA World Cups and qualifying consistently since 1978. Spain has also won three continental titles, having appeared at 10 of 15 UEFA European Championships.

Spain became the first European team to win a FIFA World Cup outside of Europe, having won the 2010 tournament in South Africa, as well as having won back-to-back European titles in Euro 2008 and Euro 2012, defeating Germany and Italy in the respective finals, making them the only national team with three consecutive major titles. Because of this, from 2008 to 2013, the national team won the FIFA Team of the Year, the second-most of any nation, behind only Brazil. Also between February 2007 and June 2009, Spain went undefeated for a record-equalling 35 consecutive matches, a record shared with Brazil. Their achievements have led many experts and commentators to consider the 2008–2012 Spanish squads, among the best ever international sides in world football.

Tiki-taka has been variously described as "a style of play based on making your way to the back of the net through short passing and movement", a "short passing style in which the ball is worked carefully through various channels". and a "nonsensical phrase that has come to mean short passing, patience, and possession above all else"

Ten Most Expensive Restaurants In The World

Enrique Ready To Return To Club Football After Spain's Experience