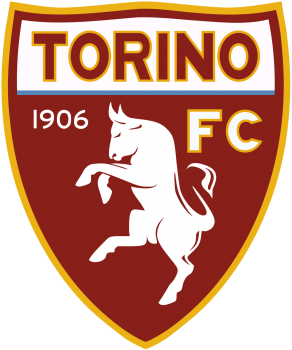 Torino Football Club commonly referred to as Torino or simply Toro is an Italian professional football club based in Turin, Piedmont. It currently plays in Serie A.

Founded as Foot-Ball Club Torino in 1906, Torino is among the most successful clubs in Italy with seven league titles, including four consecutive league titles during the 1940s. The Grande Torino, as the team was known, was widely recognized as one of the strongest footballing sides of the period, until the entire team was killed in the 1949 Superga air disaster. They have also won the Coppa Italia five times, the last of which was in the 1992–93 season. Internationally, Torino won the Mitropa Cup in 1991 and were finalists in the UEFA Cup in 1991–92.

Torino plays all of its home games at the Stadio Olimpico Grande Torino (also known as the Stadio Comunale "Vittorio Pozzo" until 2006). The club's traditional color is maroon, and its symbol is a rampant bull, the traditional symbol of the city of Turin, from which the club's nickname is derived, "El Toro" (The Bull).

The first official match after the club's foundation, a derby match against Juventus, took place on 13 January 1907 at the Stadio Velodrome Umberto. The club later moved to the Piazza d'armi, which comprised numerous pitches: from 23 January 1911, the Lato Ferrovia; and from 26 February 1911, the Lato Crocetta. Towards the end of 1913, the club moved to the Stradale Stupinigi; with the outbreak of the First World War, the stadium was requisitioned for military purposes.

From 11 October 1925 until the end of the 1925–26 season, Torino played their home games at Motovelodromo Corso Casale (now restored, it is dedicated to Fausto Coppi and also hosts American football matches), while awaiting their move to the Stadio Filadelfia. The "Fila" as it was known was heavily associated with the exploits of the Grande Torino team of the 1940s: opened on 17 October 1926 with a match against Fortitudo Roma, it hosted Torino's games continuously until 11 May 1958 (the final match being a 4–2 victory over Genoa). In the 1958–59 season, the club briefly moved to the Stadio Comunale: the move was short-lived, however, as the club was relegated to Serie B that year, and returned to the Filadelfia out of superstition.

Built specifically for the 1990 FIFA World Cup, the Stadio Delle Alpi was home to Torino from 1990 to 2006. Following the reconstruction carried out to make the stadium suitable to host the 2006 Winter Olympics opening ceremony and closing ceremony, Torino returned to the Stadio Comunale, renamed the Stadio Olimpico. The new capacity was now 27,958 seated, reduced by about 38,000 from the original in compliance with modern safety standards. In April 2016, the Olimpico was renamed in honor of the Grande Torino.

The grandstand of the new Stadio Filadelfia; on the right, the remains of the old stadium

The Stadio Filadelfia also served as the training ground of Torino from 1926 to 1993. More recently, from 2006 to 2017, the team's training base was the Sisport di Corso Unione Sovietica. In the 2017–18 season, Torino returned to training at the reconstructed Filadelfia.

Serie A: Torino Stun AC Milan To Give Napoli Pace In Title Race

Serie A: Vlahovic Inspires Juventus To Win Torino To Ease Pressure On Allegri

Serie A: Napoli Strengthen Hold On Third Spot With 1-0 Win Over Torino

Serie A: Torino Hold Juventus To Draw In Turin Derby