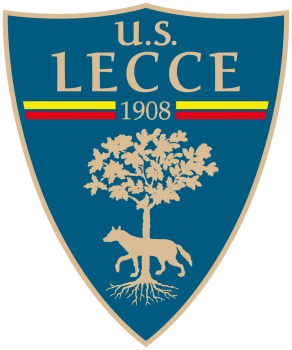 Unione Sportiva Lecce, commonly referred to as Lecce, is an Italian football club based in Lecce, Apulia.

It currently plays in Serie A, the highest level of the Italian football pyramid, and plays its home games at Stadio Via del Mare which has a capacity of 31,533 spectators. Lecce's current coach is Fabio Liverani who joined in September 2017 leading the giallorossi to a double promotion from Serie C to Serie B first and Serie A TIM after.

The club was formed in 1908 and has spent a large part of their recent history bouncing between Italy's second division and Serie A, where the team debuted in the 1985–86 season. Its best Serie A finish is the ninth place obtained in the 1988–89 season. The club is 27th in the Serie A all-time table and is the second club from Apulia as regards appearances in the first two tiers of Italian football, with 15 Serie A seasons and 25 Serie B seasons.

Lecce won a Coppa Ali della Vittoria as Serie B winner in 2010, a Coppa Italia Serie C in 1975 and an Anglo-Italian Cup Semiprofessionals in 1976.

Lecce players and fans are nicknamed salentini or simply giallorossi or lupi.

Lecce was founded as Sporting Club Lecce on 15 March 1908, initially including football, track-and-field, and cycling sports. The first club president was Francesco Marangi. The first colors worn by Lecce during this time were black and white stripes, known in Italy as bianconeri.

In its formative years, Lecce played in mostly regional leagues and competitions. During the 1923–24 season, the club dissolved before returning on 16 September 1927 as Unione Sportiva Lecce. The club was still wearing black and white stripes (similar to Juventus' kit) at this point, and the first president under the name Unione Sportiva Lecce was Luigi López y Rojo.

Lecce finally saw the light at the end of the 2017–18 season, when the giallorossi achieved promotion to Serie B under new manager Fabio Liverani securing a top-two finish with a 1–0 victory against Paganese with one game to go. The following season saw Lecce clinch the second consecutive promotion, gaining a spot in Serie A for the first time in seven years, thanks to a second-place finish in Serie B.

Lecce's home games are played in the 31,533-seater known as Stadio Via del Mare.

The main rivalry is with the other best football team from Apulia, S.S.C. Bari. The match against them is called derby di Puglia. The first derby di Puglia was played on 8 December 1929 in Serie B in Lecce, with the home team winning 1-0. After that occasion, the derby di Puglia was played many times in Serie C and Coppa Italia, and especially in Serie A. The first derby played in Serie A was played on 27 October 1985 in Bari and was won by the home team. The last one was also played in Bari on 15 May 2011 and saw Lecce prevailing by 2-0 and securing their stay in Serie A (however that match was later subjected to an investigation for match-fixing).  Among the most important wins in the derby for Lecce there is a Serie B match ended 4-0 in Bari on 22 December 2007.

On the other end, Lecce has a famous and long-standing friendship with the fans of Palermo.