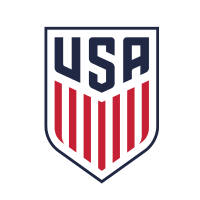 United States of America (the) - USA

The team has appeared in eleven FIFA World Cups, including the first in 1930, where they reached the semi-finals. The U.S. participated in the 1934 and 1950 World Cups, winning 1–0 against England in the latter. After 1950, the U.S. did not qualify for the World Cup until 1990. The U.S. qualified as host of the 1994 World Cup, where they lost to Brazil in the round of sixteen. They qualified for five more consecutive World Cups after 1994 (for a total of seven straight appearances, a feat shared with only seven other nations), becoming one of the tournament's regular competitors and often advancing to the knockout stage.

The U.S. reached the quarter-finals of the 2002 World Cup, where they controversially lost to Germany. In the 2009 Confederations Cup, they eliminated top-ranked Spain in the semi-finals before losing to Brazil in the final, the team's only appearance in the final of a major intercontinental tournament.

The U.S. also competes in continental tournaments, including the CONCACAF Gold Cup and Copa América. The U.S. won seven Gold Cups and the inaugural edition of the CONCACAF Nations League, and has achieved a fourth-place finish in two Copa Américas, including the 1995 edition and 2016 edition. The team's head coach is Gregg Berhalter, since November 29, 2018. Earnie Stewart is the team's General Manager since August 1, 2018.

Under Berhalter the team lost in the 2019 Gold Cup Final 1–0 against Mexico, denying them a chance at becoming back to back champions. Throughout the coronavirus pandemic, an influx of new young talent began to grow into a host of players playing for top European clubs, with Christian Pulisic, Weston McKennie, and Gio Reyna being some of the more notable names.

This new group won the inaugural CONCACAF Nations League with a classic 3–2 victory against Mexico in the Final. They also won the 2021 Gold Cup against Mexico on August 1. With a 1-0 friendly victory over Bosnia and Herzegovina on December 18, 2021, the team set a program record for wins in a calendar year, with 17 wins, 2 losses, and 3 draws.

The United States qualified for the 2022 World Cup by finishing third in CONCACAF qualification with a 7–3–4 record. The qualifying campaign included an unbeaten record at home and a draw away to Mexico at Estadio Azteca.

Kenyan Nurse To Be Jailed In $100 Million Fraud Case

Ten Most Dangerous Places In The World

Ten Countries With Highest Cases Of Rape In The World

Ten Best Universities In The World

Ten Deadliest Weapons In The World