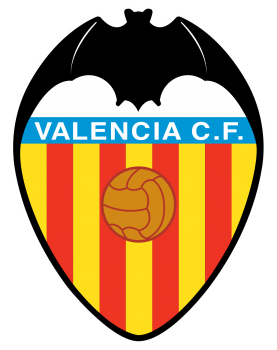 They play in La Liga. Valencia has won six La Liga titles, eight Copa del Rey titles, one Supercopa de España, and one Copa Eva Duarte. In European competitions, they've won two Inter-Cities Fairs Cups (the predecessor to the UEFA Cup), one UEFA Cup, one UEFA Cup Winners' Cup, two UEFA Super Cups, and one UEFA Intertoto Cup. They also reached two UEFA Champions League finals in a row, losing to La Liga rivals Real Madrid in 2000 and German club Bayern Munich on penalties after a 1–1 draw in 2001. Valencia were also members of the G-14 group of leading European football clubs and since its end has been part of the original members of the European Club Association. In total, Valencia has reached seven major European finals, winning four of them.

Valencia was founded in 1919 and have played their home games at the 55,000-seater Mestalla since 1923. They were due to move into the new 75,000-seater Nou Mestalla in the northwest of the city in 2013, but the final move date has been postponed while the stadium remains under construction.

Valencia is the third-most supported football club in Spain, behind heavyweights Real Madrid and Barcelona. It is also one of the biggest clubs in the world in terms of the number of associates (registered paying supporters), with more than 50,000 season ticket holders and another 20,000+ season ticket holders on the waiting list, who can be accommodated in the new 75,000-seater stadium.

Over the years, the club has achieved a global reputation for its prolific youth academy, or "Acàdemia." Products of their academy include world-class talents such as Raúl Albiol, Andrés Palop, Miguel Ángel Angulo, Javier Farinos, David Albelda, Gaizka Mendieta and David Silva. Current stars of the game to have graduated in recent years include Isco, Jordi Alba, Juan Bernat, José Gayà, Carlos Soler, Ferran Torres, and Paco Alcácer.

The club was established on 5 March 1919 and officially approved on 18 March 1919, with Octavio Augusto Milego Díaz as its first president; incidentally, the presidency was decided by a coin toss. The club played its first competitive match away from home on 21 May 1919 against Valencia Gimnástico and lost the match 1–0.

Valencia CF moved into the Mestalla stadium in 1923, having played its home matches at the Algirós ground since 7 December 1919. The first match at Mestalla pitted the home side against Castellón Castalia and ended a 0–0 draw. In another match the day after, Valencia won against the same opposition 1–0. Valencia CF won the Regional Championship in 1923 and was eligible to play in the domestic Copa del Rey cup competition for the first time in its history.

Former two-time European Footballer of the Year award winner Alfredo Di Stéfano was hired as coach in 1970, and immediately inspired his new club to their fourth La Liga championship and first since 1947. This secured Valencia its first qualification for the prestigious European Cup, contested by the various European domestic champions. Valencia reached the third round of the 1971–72 competition before losing both legs to Hungarian champions Újpesti Dózsa. In 1972 The club also finished runners up both in La Liga and the domestic cup, losing to Real Madrid and Atletico Madrid, respectively. The most notable players of the 1970s era include Austrian midfielder Kurt Jara, forward Johnny Rep of the Netherlands and Argentinian forward Mario Kempes, who became the La Liga top scorer for two consecutive seasons in 1976–77 and 1977–78. Valencia would go on to win the Copa del Rey again in the 1978–79 season, and also capture the European Cup Winners' Cup the next season, after beating English club Arsenal in the final, with Kempes spearheading Valencia's success in Europe.

Valencia started the 1999–00 season by winning another title, the Spanish Super Cup, beating FC Barcelona. Valencia finished third in the league, four points behind the champions Deportivo de La Coruña, and level on points with second-placed Barça. But the biggest success was in the UEFA Champions League; for the first time in its history, Valencia reached the European Cup final. However, in the final played in Paris on 24 May 2000, Real Madrid beat Valencia 3–0.

It was also Claudio López's farewell, as he had agreed to sign for the Italian side Lazio, also leaving was Farinós for Internazionale and Gerard for Barcelona. The notable signings of that summer were John Carew, Rubén Baraja, Roberto Ayala, Vicente Rodríguez, and the Brazilian left-back Fábio Aurélio. Also bought that season was Pablo Aimar in January. Baraja, Aimar, Vicente, and Ayala would soon become a staple of Valencia's dominance of the early 2000s in La Liga.

Tchouameni, Alaba Out With Injury, To Miss Spanish Super Cup