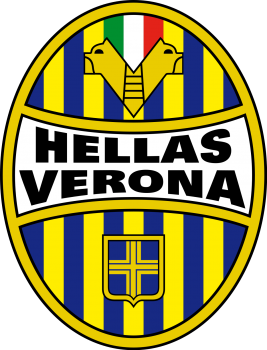 Hellas Verona Football Club, commonly referred to as Hellas Verona or simply Verona, is an Italian football club based in Verona, Veneto, that currently plays in Serie A. The team won the Serie A Championship in 1984–85.

Home games are played at the Stadio Marc'Antonio Bentegodi, Verona which has a capacity of 39,371.

The intercity fixtures against Chievo Verona are known as the "Derby Della Scala". The name refers to the Scaligeri or Della Scala aristocratic family, who were rulers of Verona during the Middle Ages and early Renaissance. In the season 2001–02, both Hellas Verona and the city rivals of Chievo Verona were playing in Serie A. The first-ever derby of Verona in Serie A took place on 18 November 2001, while both teams were ranked among the top four. The match was won by Hellas, 3–2. Chievo got revenge in the return match in spring 2002, winning 2–1. Verona thus became the fifth city in Italy, after Milan, Rome, Turin, and Genoa to host a cross-town derby in Serie A.

Serie A: Inter Milan Move Past Verona With A Point From Table Top

Serie A: Simeone's Brace Condemns Juventus To Another Loss

Darmian To Inter's Rescue Again With Title In sight