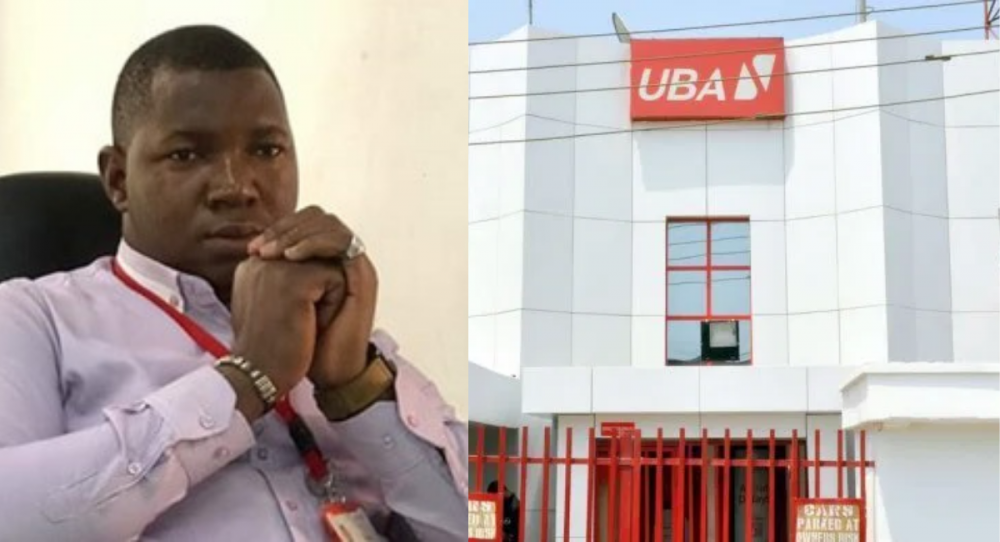 According to FIJ, a customer, Mberede Lovelyn Chiamaka had invested N11 million alongside her husband, Onuba Julius, in UBA's Target Account.

The UBA Target account is a savings account specifically designed for individuals to save towards a project or set goal e.g. children's education, wedding, further studies, etc. It offers customers the convenience of savings and maximizing their investments, whilst having flexible access to their account at any time.

For four years, Chiamaka had been operating a UBA account. She opened her account at Oba Akran, Lagos, where she and her husband had been fixing their money through her own account at the banks treasury bill. She said that anytime they fixed their money, they always obtained a certificate of investment from UBA.

In 2019, while her husband, Onuba Julius, was at their shop at Oshodi Express, along Charity Road, where they sold cosmetics and hair extensions in wholesale, he was approached by a staff member of UBA, Monday Sule Ilemona, who marketed the UBA Target Account to them.

Onuba explained to Monday that they already had an account with UBA where they fixed money. This explanation did not deter Monday. He sought to know the platform they fixed their money in, and when he was told that it was treasury bills, Monday found a perfect opportunity to market UBA Target Account.

Monday explained that treasury bills was fixing money with the Federal Government through UBA, while the UBA Target Account was directly fixing money with UBA. He further convinced Onuba that if they had enough turnover in their target account, they would be granted a loan from UBA to expand their business. In addition to all these, Monday explained that UBA gave gifts to those who ran UBA Target Accounts, depending on the amount of money that was fixed.

When Onuba got home, he gave Chiamaka a download of everything Monday had told him. He also suggested that instead of going to the Oba Akran branch where they had been using, it was more convenient to use the Oshodi branch that was close to their shop to renew their fixed deposit. This decision would lead to a downward spiral that both husband and wife would struggle to recover from.

When they started using the Oshodi branch, Monday became their account manager and had unfettered access to their accounts. He had asked Chiamaka and her husband to write a letter to change account officers from the person who was managing it before to him.

But first, Chiamaka and her husband went to the Oshodi branch to confirm if Monday Sule Ilemona was really a staff of UBA. In the bank, they saw Monday upstairs, in his office, with his identity card, working on a laptop like other staff. This, for them, was a confirmation that at least, Monday was authentic.

Monday took the couple to the branch manager, Oyekunle Oyetunde, introducing them to him as his new customers. They detailed out what Monday had told them, and confirmed from Oyekunle if everything Monday had said was true. Oyekunle answered in the affirmative and gave Monday the percentage of interest that would be used for the amount they wanted to fix.

Chiamaka said as per a report by FIJ, “Based on the information we got from the branch manager, we had the confidence that what he told us was real. We never knew that it would come out to be a fraud.”

The last money Chiamaka had fixed at UBA with the treasury bills was N9million. After she and her husband had come to a decision following a meeting with the branch manager, they decided to try out the UBA Target Account. They met Oyekunle again and told him they’d like to fix their money. Monday was called to attend to them. Still, they were hesitant to put in all their money at once and told Monday that they weren’t going to put all the N9million into the new package (UBA Target Account) that had just been introduced to them.

Around November 2019, Chiamaka fixed N7million in the treasury bill and N2 million in the Target Account so that they could familiarize themselves with how it worked. Monday brought out a form and asked Chiamaka to write her name and sign on it.

“Monday was filling other parts of the form. I asked him what are you filling? Monday said that that side would be filled by him, by the bank, not by me,” Chiamaka said.

She later did a thumbprint and left the bank for her shop. At her shop she received a debit alert of N2 million with Monday’s name appearing instead of UBA as she would have expected. Immediately, she returned to the bank and confronted Monday, but he explained that since he was the account manager, anytime they fixed money with UBA Target Account, it was his name that would appear.

Chiamaka’s experience with fixing money in the treasury bill was different. She told Monday that when she used to fix the money, it was UBA and not any individual’s name that she saw in the debit alert.

“He said that all the debit and credit alert on Target Accounts must show your account officer’s name,” she recalled.

Chiamaka was not the only victim of Monday Ilemona. The UBA staff also defrauded five customers of N15million while operating straight from the bank premises.

Read the full story on FIJ.

Meanwhile, UBA says it has begun investigations into the fraud case.

According to FIJ, Ramon Nasir, UBA’s Group Head of Media and External Relations, said immediately after sighting the story, the Head of Internal Control wrote to the bank’s Head of Customer Service and an Executive Director to investigate the issue and find an immediate resolution to the matter.

“I can assure you that from the responses I have had this morning, the investigation is ongoing. This issue will be resolved and an amicable resolution will be made,” he said.

“We will resolve it as quickly as we can and to the benefit of the complainant.”

Nasir explained that even though Monday was most probably acting on his own personal volition, it didn’t excuse the responsibility of the bank to the customer.

“The customer is not responsible to start identifying whether the staff of any institution is real or not real. The guy holds an ID Card so he is an agent of the bank. We will find a resolution to this.”