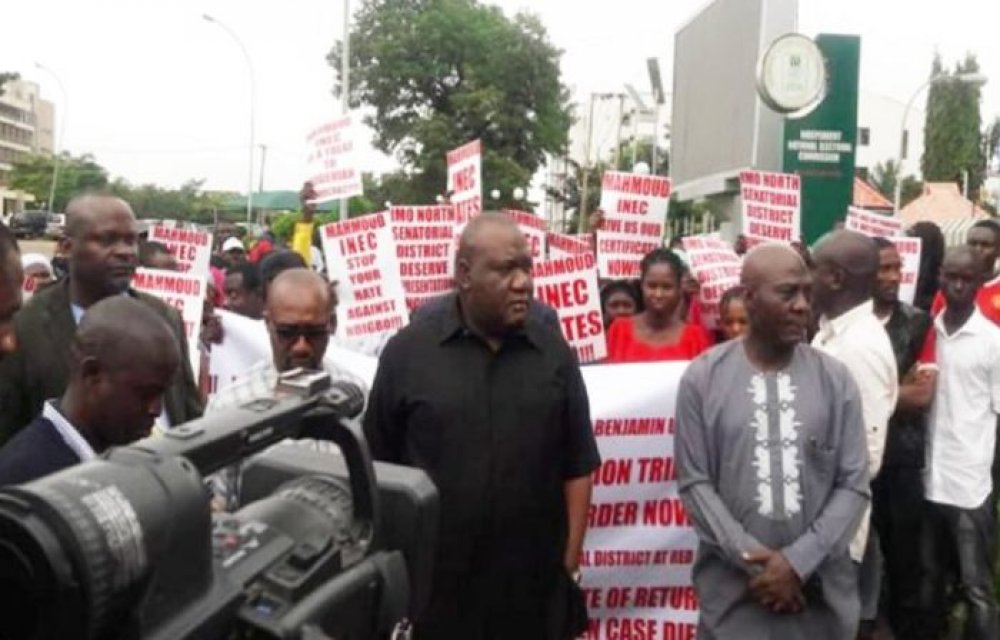 The entrance office of the Independent National Electoral Commission (INEC) in Owerri, Imo State has been blocked due to protests against the outcome of the Imo North senatorial bye-election on December 5.

AllNews gathered that the INEC office was blocked on Tuesday by a political pressure group, known as the Coalition of Okigwe Youths in a peaceful protest displaying placards with different inscriptions in front of the INEC office.

Some of the inscriptions were ‘Do not create bad precedence’, ‘Who was the candidate of the All Progressives Congress?‘, ‘Obey the rule of law’, and ‘Time for substitution of candidates has elapsed’ among others.

Speaking to pressmen, the group’s Coordinator, Chiedozie Ibekwe, described the youths as “critical stakeholders in the development and deepening of democracy’’.

He affirms that the youths of Imo North would not allow their senatorial district to be used for what he described as “political experiments with dangerous undertones”.

Citing two court injunctions that disqualified candidates of the All Progressive Congress (APC) barely 24 hours to the election, Ibekwe urged the electoral body to revisit its pronouncement that APC was the winner of the election.

He argued that in line with the Electoral Act as amended, the electoral umpire was expected to declare Emmanuel Okewulonu of the Peoples Democratic Party as the winner of the election, having come second in the polls.

He said “Our position is hinged on the fact that INEC declared a political party as winner of the election without announcing the candidate of that party.

“It is an aberration to the rule of law that a party that went into the election without a bona fide candidate was declared the winner of that election.

“We, therefore, use this peaceful protest to urge INEC to comply with the court orders that technically disqualified the APC from the contest and declare the PDP and its candidate, Emmanuel Okewulonu, as the winner."

However, INEC Public Relations Officer in Imo, Emmanuella Ben-Opara, thanked the protesting youths for being civil.

She assured them that their concerns would be transmitted to the commission’s management while advising them to channel their grievances to the tribunal, as spelled out in the Electoral Act.